The shift reflects a growth spurt since IAG’s formation in a merger of BA and Spain’s Iberia in 2011 that’s seen the London-based company buy the former British Midland — from Lufthansa — as well as Barcelona-based discounter Vueling and most recently the Irish flag-carrier.

IAG Chief Executive Willie Walsh pushed through thousands of job cuts at Iberia while using Vueling to combat the challenge of low-cost carriers led by Ryanair Holdings Plc. He has also embraced Gulf rivals, inviting Qatar Airways to join the Oneworld alliance in a move that led it to become a 10 percent investor.

Lufthansa and Air France-KLM Group, the No. 1 by traffic, are both struggling to deliver a step change in labor costs to match that achieved by Walsh at Iberia and earlier at BA, where he faced down cabin-crew unions during months of walkouts.

Lufthansa, where CEO Carsten Spohr is axing unprofitable routes and moving short-haul flights that don’t feed its hubs to low-cost unit Eurowings, suffered its worst-ever strike in November, with 4,700 flights canceled in more than a week of industrial action by flights attendants opposed to benefit cuts.

IAG is easily the biggest of Europe’s three main network airlines by value, with a market capitalization of 12.3 billion pounds ($18 billion), compared with 6.8 billion euros ($7.4 billion) at Lufthansa and 2.3 billion euros at Air France-KLM.

While Air France-KLM remains Europe’s biggest carrier, it barely outperfomed Lufthansa, with a traffic gain limited to 2.8 percent to 236 billion RPKs as it struggled to force through a short-haul restructuring plan that’s prompted violent clashes with workers.

IAG is set to close in further this year, since 2015’s figures including only three months of Aer Lingus traffic.

Lufthansa, with its subsidiaries, still leads the European passenger rankings, with 107.7 million carried last year, compared with 89.8 million at Air France-KLM and 88.3 million at IAG. 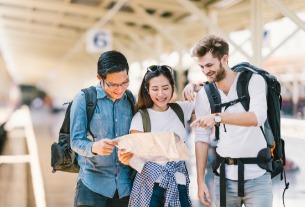 Covid vaccine: Which parts of the travel industry will benefit first?