The number of Chinese traveling overseas each year is predicted to reach 174 million within the next four years, and they will be spending $264 billion while doing it, or roughly the gross domestic product of Singapore, according to a new industry survey.

It said the Chinese outbound tourism market has been boosted by rising numbers of young people traveling, high disposable incomes, ongoing urbanization and easier visa arrangements to many countries including the United States, Canada, South Korea and Japan. 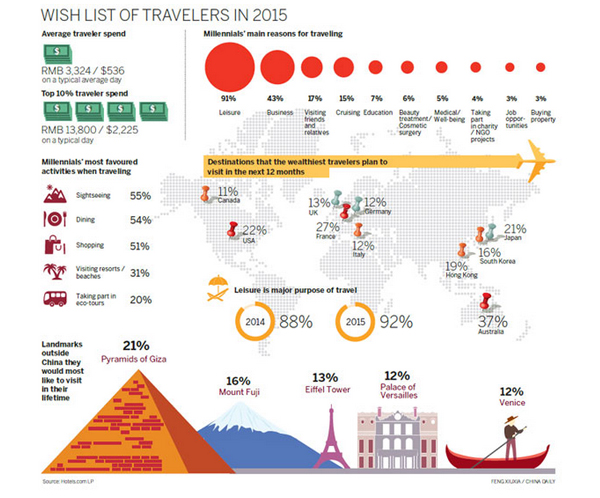 The country's technology-savvy people, the younger generation and higher-salary earners had become the driving forces, it said.

The survey, in its fourth year, interviewed more than 3,000 Chinese outbound travelers and 1,500 hotel operators worldwide. It considered the younger generation as those aged 18 to 35, also known as the millennials.

Nearly 60 percent of the interviewed hotels said the number of Chinese tourists aged below 35 has risen and that the trend will continue.

Their growth is especially strong in the Asia-Pacific region, where 78 percent of hoteliers reported an increase in those.

The study also revealed the young tourists were less dependent on travel agencies than their older peers, and enjoyed writing reviews of their travel experiences on social media platforms.

Some 80 percent of respondents booked and planned their trips via mobile phones, computers and laptops over the past 12 months, against 53 percent in the previous year.

The continuous growth in outbound travel by Chinese has already been presenting huge opportunities to the global tourism industry and hoteliers.

Figures show Chinese travelers spent the most at hotels in New Zealand, Sweden and Argentina, while Australia, Japan and France are the three most popular planned destinations for Chinese travelers over the next 12 months.

Last year, the United States and Thailand were the top two destinations for outbound Chinese travelers, based on booking data from hotels.com. Around 840,000 Chinese travelers visited Australia, an 18.4 percent rise on 2013.

Jessica Chuang, regional marketing director at hotels.com, said the popularity of Australia and Japan was the result of a continuous depreciation in their currency against the Chinese yuan.

"That means, simply, that Chinese travelers are able to spend more there," she said.

Most of their spending in foreign countries was on shopping, catering and sightseeing, according to the Travel Monitor.

The two flew business class on Lufthansa airlines, stayed at five-star hotels, and toured the most famous sites. She plans to visit the US with her family next year.

"I'd rather spend quality time and money traveling with the people I love than buying a luxury handbag," she said.