Australia's leading online travel company, Wotif.com Holdings Limited, today announced a profit after tax of $27.5 million for the six months to 31 December 2012. This result is down 4.6% on the corresponding period last year, primarily attributable to increased costs from strategic investment in online marketing, web maintenance and headcount.

The Group sold $532 million of accommodation (excluding GST) in the six month reporting period, with a total of 3.5 million room nights which was 4% down on the corresponding period and 3% up on the second half of 2012.

Revenues and margins closely followed the transaction value trends. Total revenues were down1% for the corresponding period.

The overall profit result was impacted by increased operating expenditure from greater investment in marketing, web maintenance and headcount costs, with total operating costs up by 6%. Headcount costs primarily related to the hotel product, search and customer service teams.

• Wotif.com was ranked as the number one Travel Agency site in Australia, on a monthly basis, by independent ratings agency Hitwise

• 10% of all Australian accommodation was sold by the Wotif Group

• Wotif.com brand recognition in Australia continues above 60% and above 30% in New Zealand

• Over 1.5 million visitors a month from mobile, delivering 9% of Wotif.com room nights

• 25,000+ hotels and accommodation venues (up 26%) working directly with the Group in 69 countries. Almost 50% of this increase relates to Asian properties。

• Flights operations continue to grow, with a year-on-year growth in total transaction value of 14% to $59.5 million

The Wotif Group this morning announced a half year after tax profit of $27.5 million,
down 4.6% on the same half last year.

In commenting on the result Scott Blume, Wotif’s Group CEO, said:"The results reflect a combination of factors and mixed performance by the individual lines of business. Both Australia and New Zealand Accommodation (up 1% in revenue) and Flights and other (up 11% in revenue) were positive performances in a generally lacklustre domestic retail environment and given the continuing strength of the Australia dollar, which continues to stimulate international travel. These relatively solid performances were however offset by decline in accommodation revenue in Asia and the rest of the world (down 19% in revenue for the corresponding period). Our Group margins continue to hold at around the same levels as the prior corresponding period. As announced at the Annual General Meeting in October 2012 we have started to increase our commission from hotel suppliers to 11% with effect from 1 January 2013 and this initiative is on track and is being phased in as existing supplier contracts expire. When this initiative is finalised we will continue to be lowest cost of distribution for our hotel suppliers compared to comparable online players."

The Group's reported result also included further investment in the business in technology, headcount and marketing costs so as to position the Company for further growth. In commenting on this, Blume said:

"We will continue to invest in developing our people, sites and systems to enable
the next phase of our growth and continue to ensure that our customers have an
outstanding onsite and support experience with our teams."

After commencing in the new role on 21 January and in commenting on the business, he said:"After being immersed in the business for six weeks it is very clear that we have an outstanding business, culture and team. The fact that we sell 1 in every 10
hotel rooms in Australia speaks for itself. Over the coming months I will be working with the team on ways in which we can leverage our significant internal intellectual property in the online space for further growth to the benefit of all our stakeholders."

An 11.5 cent interim dividend per share was announced by the Company on releasing its results. 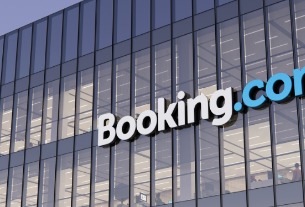