Flight Master, a Chinese aviation data provider, has released an analysis report of China’s civil aviation operation in the first quarter of 2021, showing that the passenger throughput in the first three months this year is estimated to have exceeded 102 million, an increase of 37.8% year on year, but still 36.5% lower than the same period of 2019.

By March, with the pandemic under control, business travel rebounded and colleges resumed classes. The Covid-19 test requirement was canceled for visitors traveling from low-risk regions to Beijing. The Shijiazhuang airport in northern China near the capital city also resumed operation. Flight Master estimated that passenger throughput in March increased 100.3% month-on-month to over 47.98 million, up by 216.8% year-on-year and nearly reached 90% of the level in the same period in 2019.

Among 39 mega airports with an annual passenger traffic of 10 million or above, 22 airports had operated over 70% of the scheduled flights in the first quarter, according to the report. Sanya Phoenix International Airport and Chengdu Shuangliu International Airport were the only two airports that had operated more than 80% of the scheduled flights. Besides, 30.8% or 12 of these airports had resumed more than 80% of the flights operated in 2019. 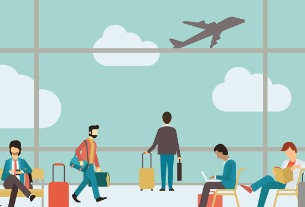