Home > > "First half confirmed the uptrend in the hotels business in Europe": Accor

"First half confirmed the uptrend in the hotels business in Europe": Accor

At constant scope of consolidation and exchange rates, the like-for-like increase was 6.1 percent, confirming that the environment remains favourable in the Services and Hotels businesses, stated the company.

The Group´s expansion strategy accounted for 7.5 percent of revenue growth for the period, while disposals carried out as part of the ongoing asset-right strategy in the Hotels business reduced revenue by 3.6 percent. The currency effect was a negative 1.3 percent for the period.

About hotels, it stated: "The 8.6 percent reported increase in hotels revenue confirms the continuing uptrend in the European hospitality industry cycle underway since fourth-quarter 2006. Growth in Europe was led by increases in both the occupancy rate (up 1.1 point) and the average room rate (up 6.9 percent)."

In the economy hotel segment, revenue rose by 7.7 percent as reported and 5.8 percent like-for-like in the first half.

In the US economy hotel segment, revenue ended the first half up by 1.9 percent like-for-like, but down 6.2 percent as reported due to the dollar´s weakness against the euro. 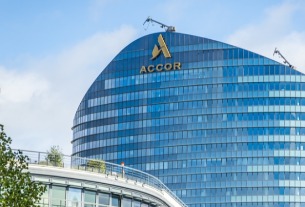