The proceeds will be used for market expansion.

Egaga, a Hangzhou-based hotel retail smart solution provider, raised millions of yuan in its Pre-A + round of financing, led by a capital fund under Heng Shen Holding, 36kr.com reported. The proceeds will be used for market expansion.

In April, Egaga bagged tens of millions of yuan from United Stone Capital in its Pre-A round of financing.

Founded in 2016, Egaga was originally a vending machine operator. Two years after its establishment,  the “CHIC” brand, a hotel smart retail solution, was launched.

It monitors sales in real-time, and the hotel can make SKU adjustments, and replenish and replace food according to operational data.

Egaga defines the CHIC as more than a retail device. The company hopes to make it a channel of precision marketing at hotel rooms when its number and scale become big enough. Sales will account for only 10-20% of its revenue, and the majority of the revenue will come from brand promotion through different activities.

CHIC has entered hundreds of hotels across China, and its signed hotels have two million rooms. Around 20,000-30,000 devices are set in hotels per month, mainly in the first tier cities of Beijing, Shanghai, Guangzhou, and Shenzhen, as well as those in East China’s Jiangsu and Zhejiang provinces.

Egaga makes profit through equipment sales, retail, advertising. It has two or three million yuan in revenue per week, with a growth rate of more than 200% in the past six months.

To date, the company has more than 50 employees, most of whom are technicians. (Translated by Juli) 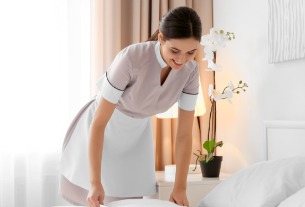