Home > > How to attain digital success in China? 8 key takeaways from ITB China

How to attain digital success in China? 8 key takeaways from ITB China

It is imperative for foreign companies to best allocate their resources in China, work out presence on preferred channels, distribution strategy and make sure their brands remain true to what they stand for.

ChinaTravelNews, Ritesh Gupta – Travel brands are looking at meticulous ways of being a part of China’s consumption economy.

According to Nielsen, the digital economy now contributes more than 30% of China’s GDP.

Here we list 8 key takeaways from the second edition of ITB China 2018, held in Shanghai in mid-May.

1. Emergence of lifestyle and shopping ecosystems: The likes of Fliggy and Meituan are expanding their respective offerings in the travel e-commerce category. Knowing about the profile of a user and eventually cross-selling via a strong recommendation mechanism is emerging as their forte.

In case of Meituan, the group’s array of services is their strength i. e. store + home + travel + local transportation concept. Steven Shu, CMO of Meituan Platform, referred to the company’s sturdy affiliation with “millennials”. He mentioned that when compared with other countries such as Germany and Britain, millennials from China prefer travelling (in addition to movies, music and fashion), they pursue higher convenience and upgraded experience.

“This group (millennials) will become the leading force of future consumption. Their annual consumption growth rate is 11%, twice that of consumers aged over 35,” mentioned Shu. In terms of monetization, Meituan is banking on selling hotel room nights and sightseeing attraction tickets together or understanding the co-relation between different shopping categories. For instance, how those book hotel rooms, how they also place dining or catering orders and opt for tickets for recreational activities. Another player, Fliggy, too, as an “entry point” for the travel sector in the Alibaba ecosystem, is continuously refining their offering and luring travel brands to open “storefronts” on its platform. In fact, the entire traveller journey, right from planning to buying to the simplification of stay at the hotel to making the most of the in-destination phase, is being enhanced. Convenience and ease are standing out, as Alibaba plays it part with features such as self-check in and face recognition, availing credit-scoring service for payments without hassle etc. Alibaba, too, is getting deeper into the lifestyle of consumers via presence in the following categories – health and happiness, local services and core commerce. The group is gathering data and strengthening the profile of users with every activity. They are focusing on crafting one id of the shoppers, naming it as “Unified ID”. Fliggy would leverage ecosystem’s user base of over 500 million mobile monthly active users, associated with China retail marketplaces. 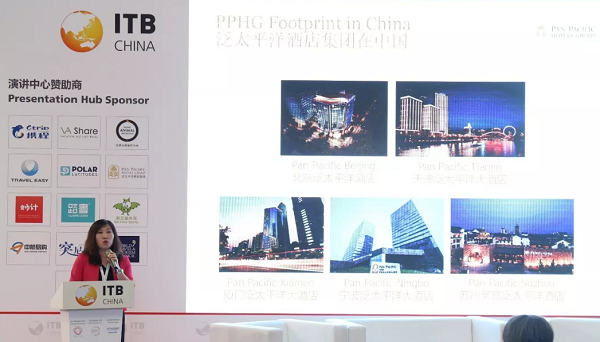 2. Online travel pie to swell further: In China, Ctrip accounts for approximately 10% of the total RMB 5.4 trillion travel market in 2017. "GMV is growing, the overall market is growing and our market share is growing (so we expect GMV to grow accordingly)," James Liang, Co-founder and Executive Chairman, Ctrip told TravelDaily China in an interview during ITB China. 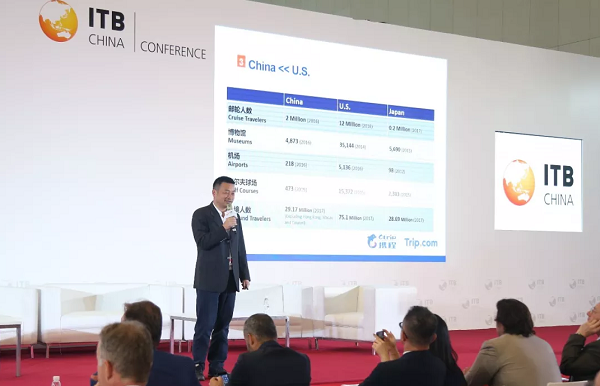 “China has emerged as a unique, specialized market. There are lots of intricacies involved in the industry and it is not about one business model that all can replicate and end up succeeding here. It is a complicated industry – be it for hotel distribution, air ticketing etc. And lots of products are non-standardized. It takes a lot of manpower effort, Ctrip has more than 15000 call center staff…so (the model) is hard to replicate,” an analyst said. Ctrip intends to sustain a high standard for serving existing customers and simultaneously count on its offline presence to go deeper into the lower tier cities. The lower end of the hotel market is still very fragmented and offline driven. Ctrip’s investment in Travelling Bestone offers it access to offline stores in over 200 cities. Currently, the group has over 6,000 franchised offline stores under different brands. Total gross merchandise volume of the offline stores grew around 50% year-on-year in the first quarter.

3. Foreign brands keen on collaborating with local partners: Collaboration and localization are two areas that foreign businesses can’t do without. As exemplified by the likes of Accor, Marriott, Lufthansa, Emirates and others, counting on local people, processes, platforms etc. is a must for any foreign to excel. Being number one in this challenging market isn’t a priority. Rather sampling of brands by forging a strategic alliance seems to be the prudent way to go forward. Accor and Priceline have chosen this route in the last few years.

As for targeting shoppers in China, Lufthansa acknowledges that travel brands can’t ignore the shopping innovation in China. The group has worked out connections with Qunar and Fliggy. In both the cases, the ticketing will take directly with Lufthansa. Referring to Fliggy, Veli Polat, Senior Director Sales Greater China, Lufthansa Group Airlines, shared: “The control is with us – for instance, which O&Ds to push within the flagship store on Fliggy, essentially resulting in closer involvement than what we can have with Ctrip.” He said, “The real challenge starts after initiating the new connections. These are very dynamic touchpoints. To make them work as a proper sales channel, it would take a lot of work. We are in the learning phase as of now,” he said.

4. Business travel: Business travel in China remains an attractive proposition for the industry, marked by sustained business confidence and opportunities presented by policies such as the Belt and Road initiative. But China still has a fair bit to catch up to refine their overall travel and expense management by re-looking at inflexible travel policies and low policy compliance, and complex reimbursement processes.

Business travel management is gradually progressing toward the electronic form of approval for expenditure incurred, slowly doing away with manual processes, handling of paper receipts etc., mentioned Jonathan Kao, Managing Director - Greater China, BCD Travel. Also, there is focus on analytics around employees travel expense and evaluating what needs to be done to optimize the same. 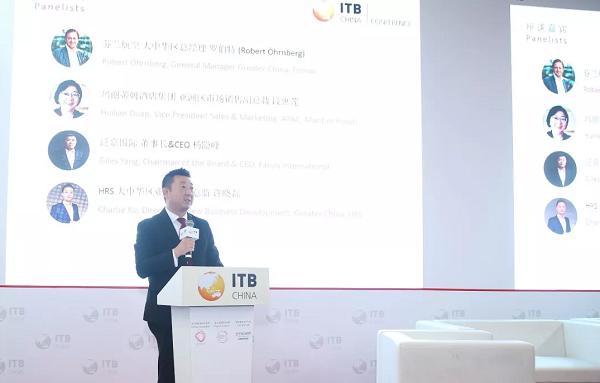 5. Ensuring a brand remains true to what it stands for: Foreign brands have often taken a beating in China. For instance, Marriott was ordered to shut down its website for a week (few months ago) over an online questionnaire that suggested some Chinese regions were separate countries. On the other hand, Starbucks has been in news for several well-planned initiatives. Be it for bringing Starbuck’s story to life in a format via augmented reality or enabling to skip queues, all via an app, the company has made right moves. Starbucks was also appreciated for introducing its website for China earlier this year.

“There are plenty of areas that foreign travel brands need to evaluate. One of them is - there is uncertainly around the China Cyber Security Law (CSL) as for how this initiative is going to impact foreign businesses operating in China and how to prepare for the same. The law regulates how companies should handle digital information, including whether and under what circumstances data can be transferred out of mainland China,” said a source.

Another executive added, “Considering the significance of digital advertising, travel companies also need to identify ‘brand unsafe’ environments before the ad is served. The reputation of a brand gets affected via an “unintended” ad placement adjacent to inappropriate content. So these areas need to be looked upon as well.”

6. Distribution: Hotel brands aren’t averse to selling via new channels, but are concerned about B2C online intermediaries showing wholesale rates on platforms such as Fliggy. “Already we can see that way rates are being leaked to even the key OTAs now that is forcing brands to put squeeze now on what kind of margins brands are going to offer to wholesalers and bedbank partners. So there is already consideration regarding how this is going to play out because if our rates going to OTAs then why the original party that leaked these rates are being given higher margin or lower static rate. We intend to capitalize on the platform but at the same time we can’t afford to endanger our 3rd party intermediary relationships in China,” mentioned a senior hotel executive.

Among the other trends, foreign wholesalers are facing competition from emerging Chinese companies, both in technology and distribution space, targeting travel agencies.  For instance, Mioji is offering an artificial intelligence-powered SaaS platform to support travel agents in the end-to-end trip planning with real time data access, itinerary automation and personalization for improved productivity.

7. Dealing with media/ channels fragmentation for reach and engagement: According to China Internet Watch’s report released in May, top 10 mobile apps by monthly active users are WeChat, QQ, Alipay, Taobao, iQiyi, Tencent Video, Baidu (search), Weibo, Youku, and QQ Browser. Other options include travel-related apps such as Qyer and Mafengwo, as well as live streaming and video platforms such as Douyin.

On how travel brands are going about working out their media mix i. e. advertising expenditure, George Cao, Co-founder/CEO, Dragon Trail Interactive said a lot depends upon the objective and the budget. He underlined that the key to dealing with fragmentation is to get creative, be it for stepping up the conversion rate or running brand awareness campaigns on certain channels that don’t even offer call to action. Possibly for a small- to medium-sized travel enterprise, one ecosystem that can cover the entire booking funnel could be prudent. “WeChat is one of the few apps that covers the whole journey, including the consumption phase and the post-trip phase,” said Cao.  Also, since ecosystems such as Baidu, Alibaba and Tencent don’t let data go out of their ecosystem, it does restrict advertisers’ media buying capabilities. Cao recommendation to deal with complexities: “Find your niche, your KOLs (key opinion leaders), your segment, be proactive…for instance, in case of Douyin (a mobile-based 15-second video platform), it was considered to be similar to other apps meant for relatively younger demographics and not too relevant content (say cheap jokes). But once destinations were showcased even older generation responded and the platform was considered to be an opportunity then,” said Cao. He said brands need to ensure they inspire and assist prospective buyers where time is being spent and get them closer to conversion. For instance, how can one wrong “emoji” in a campaign or even on a chatbot conversation can break the conversation.

8. Artificial intelligence: AI is springing from research labs into real business and consumer applications in China. Travellers are being helped in several areas of trip planning and buying via AI – trip recommendations, customer service via a chatbot, serving relevant ads/ content by improving cross-device targeting etc.

One of the interesting developments that emerged during the ITB China was the increasing efficacy of devices in facilitating conversations by breaking the language barrier. One of the joint winners of the ITB China Startup Award, Timekettle (the other company being TravelFlan) showcased their WT2 translator, a smart and wearable real-time translating earphone. “For now, translation is among the best applications of AI in this sector,” said Alex Qin, co-founder, Timekettle. The device consists of a pair of headsets which connect to an app. Speech passes through the headset to the smartphone which translates it. And eventually, it is then spoken into an earpiece worn by a second person.

After the resounding success of the second edition of ITB China, the event will return to Shanghai next year - 15 - 17 May, 2019, at the Shanghai World Expo Exhibition and Convention Centre. 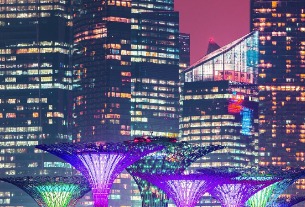 Kayak for Business launch inspired by 'market shortcomings'
©2020 广州力矩资讯科技有限公司 粤ICP备06070077号
Tell us more about yourself!