HNA Tourism group, which is a Fortune 500 company with multiple business lines in China, is buying Carlson Hotels Inc. from Carlson Hospitality group. 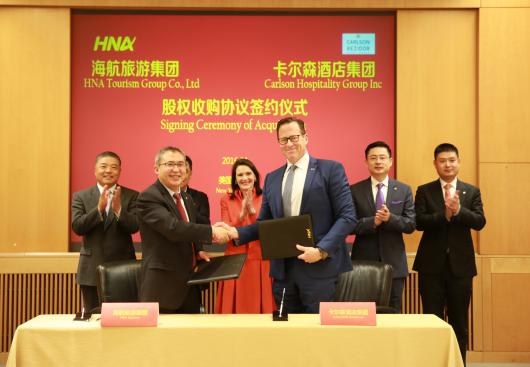 The price of the deal has not been revealed.

HNA already has interests in multiple travel brands. It is the largest shareholder in Spanish hotelier NH Hotel Group SA as well as Spokane, Washington-based Red Lion Hotels, it owns Swissport International, and has a stake in the Azul airline, among others.

Carlson Hotels is also a majority shareholder in Rezidor Hotel Group AB, which is the company’s licensee for Europe, the Middle East, and Africa. Rezidor is much more active on the growth and development front than the U.S.-based arm of the company.

“Carlson Hotels own a powerful set of global brands and this historic agreement provides tremendous opportunities for growth,” said David P. Berg, Carlson Hospitality Group chief executive officer, in a statement. “We look forward to working within HNA Tourism Group, a greatly respected global enterprise, in what will be an exciting new chapter in the history of Carlson Hotels. As part of HNA Tourism Group, Carlson Hotels will have an opportunity to advance our commitment to providing guests with hospitality world-wide.”

Berg will remain as CEO following the acquisition.

The companies have a website, Stronger Hotels Together, which promotes the value of the acquisition.

HNA was rumored to be interested in acquiring Carlson as early as March of this year, and reports that Carlson was seeking a buyer emerged in January.