Chinese arrivals to Greece expected to grow 50% in 2015

Arrivals by Chinese tourists to Greece increased 70% y-o-y to 100,000 in 2014 and it is estimated to increase 50% more y-o-y in 2015, according to Panos Livadas, Secretary General of the Greek National Tourism Organization.

The chairman of the Association of Greek Tourism Enterprises, Nikos Angelopolous, is positive about the industry’s outlook this year. “Visitor arrivals for the first quarter this year were right on target. While growth has slowed since due to the ongoing negotiations on the debt deal, we hope to regain lost ground within the year,” he said.

Mr. Angelopolous thinks the Greek tourism industry has huge potential for development, as only 10% of the legendary coastal areas has been developed, for example. He thinks Greece will eventually attract 35 million to 40 million visitors every year and contribute up to 30% to its GDP.

Ms. Kountoura invited more Chinese to visit Greece and assured her Chinese counterparts in her speech at the Sine-Greek Tourism Cooperation Seminar on May 27 that the Greek government would expedite the visa process and increase direct flights.

China’s ambassador to Greece Xiaoli Zou also thinks there is plenty of potential for bilateral cooperation. “Europe drew about 4 million of the 100 million outbound visits by Chinese tourists last year. While the number of Chinese visitors to Greece was still very small in the mix of Greece’s 20 million arrivals, the potential for growth is enormous,” he said. (Translation by David) 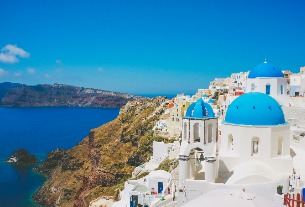