China’s State Council has ordered the merger of trainmakers China Northern Locomotive & Rolling Stock Industry Group Corp. and CSR Group into one company, according to government officials involved in the transaction.

A consolidation will facilitate efforts to win contracts abroad, said the officials, who asked not to be identified as they are not authorized to speak to the media. Details of the transaction are yet to be set, and China International Capital Corp. is drafting a plan for merging the two companies’ listed arms, they said.

The merger of the listed units will create a company with $33.6 billion of sales and $1.44 billion net income in the past 12 months, according to data compiled by Bloomberg. China CNR (601299)Corp. and CSR Corp. have a combined market value of $26 billion inHong Kong trading and employed 172,647 workers at the end of last year, the data show.

“This would create a very strong global competitor,” said Ingo-Martin Schachel, a Frankfurt-based Commerzbank AG analyst who ratesSiemens AG (SIE) shares hold. “It naturally means that it has heightened the need for consolidation among the western manufacturers, for whom there was already a slight need of that.”

China is expanding the world’s largest high-speed rail network to help sustain a three-decade economic boom. In December, CSR and China CNR won bids for 258 bullet trains worth as much as 44.3 billionyuan ($7.2 billion) to serve the growing network. CSR builds high-speed trains on its own and in a venture with Bombardier Inc. (BBD/B)

China CNR Corp. and CSR Corp. halted their shares for trading in Hong Kong and Shanghai yesterday. The two companies said they will make a “major” announcement within five working days.

Last week, Boston awarded CNR a $567 million contract to supply trains for the city’s subway system, the first deal of its kind for a Chinese company in the U.S. CNR, which will provide at least 284 train cars, offered the cheapest price among five bidders and a little more than half of Bombardier’s bid.

CSR reached an agreement in June to sell six bullet trains to Macedonia in its first European sale, according to the official Xinhua News Agency.

The merger will create a Chinese trainmaker that can better compete against Japanese companies overseas. Hitachi Ltd. (6501), the Tokyo-based machinery maker, supplied high-speed trains for the British side of the Channel Tunnel and is building a factory in the U.K. after winning a 4.5 billion pound ($7.3 billion) contract to build rail carriages.

Kawasaki Heavy Industries Ltd., another Japanese locomotive manufacturer, made the bullet trains for Taiwan’s high-speed train line that opened in 2007 while Nippon Sharyo Ltd. has won orders in the U.S. to build railcars.

China Railway Corp. (1186) increased its 2014 spending target to 800 billion yuan ($130 billion) in April, from 720 billion yuan. The country’s spending on railway construction rose 25 percent in the first nine months of the year, according to a note today Bloomberg Intelligence analysts Yi Zhu and Zhuo Zhang. It’s still only 53 percent of the full-year target, suggesting a pickup in the remaining months of the year, they said. 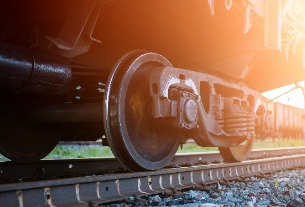 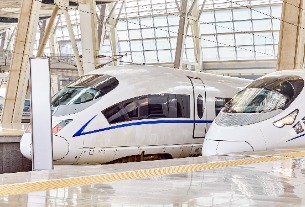