Home > > Ryanair announces a US$989 million loss and apparently things are getting better!

Ryanair announces a US$989 million loss and apparently things are getting better!

This should have been the week when Europe’s aviation markets reopened, and the holiday season started but it all feels pretty flat.

This week is apparently the beginning of the recovery, at least for the UK market and subsequently most of Europe. Holidaymakers should be returning to the beaches of Spain, Greece and Turkey; unfortunately, all three failed to make the “Green List” leaving Portugal as the winner by default! If this is the beginning of the recovery, then Ryanair for one will be delighted having just announced a loss of US$ 989 million; things can only get better, can’t they?

This week’s capacity at 64.1 million scheduled seat represents nearly two million more seats week on week which is encouraging. Total capacity for May is now at 283 million which reflects another 4 million seats being dropped by airlines in the last seven days for the rest of the month; some of that capacity cut a result of the UK’s traffic lights failing to allow access to some countries. A further 9.5 million seats have also been dropped for June suggesting that airlines are perhaps becoming increasingly concerned that lockdowns and quarantines will impact the second half of the year. 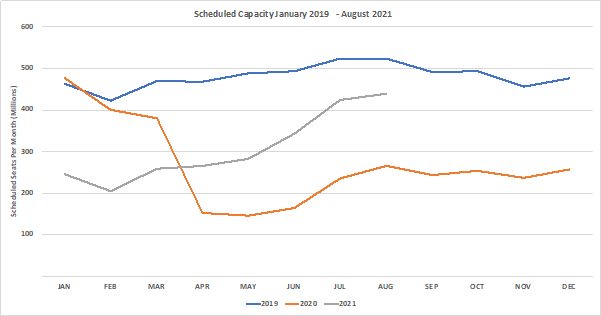 Western Europe is the fastest growing regional market week on week with a staggering 25% growth rate; repeat that for a few weeks and everything will be fine! A doubling of capacity from Turkey is responsible for this increase with over 600,000 additional seats on offer this week as the country enters a period of “gradual normalisation” whatever that means, probably another lockdown coming soon. Capacity from the UK has increased by some 278,000 with Spain the largest international destination despite it only being on the amber list and suggesting a willingness of travellers to self-isolate for 10 days on their return.

Only one region, South Asia reports a cut in weekly capacity as India continues with the latest outbreak of Covid-19; some 285,000 fewer seats available; despite that reduction there are currently 1.9 million seats scheduled to operate which is around 45% of the pre Covid weekly levels.

Although there is little change in the list of top twenty countries there are some impressive week on week growth rates although in the case of Indonesia this reflects a data correction from last week and a return to slightly above normal levels. Turkey, Spain, Germany and the United Kingdom all report double digit growth week on week as travel restrictions are eased; however, just to place that in context the UK remains at -76% of pre Covid-19 capacity levels, Germany at -72% and Spain at -51%.

Turkish Airlines return to the top ten airline list in ninth position as a result of a 45% increase in seats week on week, despite that increase the airline cannot replace Qatar Airways as the largest international airline based on ASK’s. The airline is however the only non-Chinese or US based carrier in the top ten listing; I guess that’s a decent takeaway!

This should have been the week when Europe’s aviation markets reopened, and the holiday season started but it all feels pretty flat as capacity struggles to grow, and international travels remains restricted. Looking forward there is a near 10 million increase in weekly capacity at the end of the May, much of which is based on the European market recovery and that has to be questionable given recent patterns. As always, only time will tell.

Tracking the aviation recovery: summer is over and the winter looks much better

Increasing positivity around the globe as key indicators improve MGM doesn't see a future for the Mirage, but experts say others might
©2022 广州力矩资讯科技有限公司 粤ICP备06070077号
Tell us more about yourself!