Tibet has launched a total of 130 air routes, with 61 cities connected by flights. The Tibet Autonomous Region in southwest China will build three new airports, a move to further improve the region's comprehensive transport system, according to the Civil Aviation Administration of China (CAAC).

The National Development and Reform Commission has approved the construction of the three new airports and the expansion of the Lhasa Gonggar Airport in Tibet, said the CAAC.

The three new airports will be respectively located in Lhunze County, Tingri County and Burang County. The expansion project will involve the construction of a second runway at the Lhasa Gonggar Airport.

Total investment in the project is expected to exceed 13.6 billion yuan (about 2.09 billion U.S. dollars).

The project aims to better meet locals' demand for travel, emergency rescue and socio-economic development in the region.

Transportation has long been a bottleneck inhibiting Tibet's development, as the region is situated on the Qinghai-Tibet Plateau with complex geographical conditions for the construction of roads.

Since late 2012, China has been increasing its infrastructure investment in Tibet. Tibet has launched a total of 130 air routes, with 61 cities connected by flights. The number of passenger trips made through these airports totaled 5.18 million in 2020. 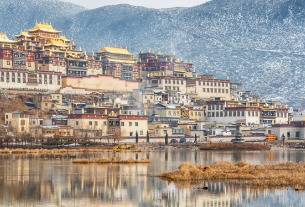