Delta survey shows that 40% of respondents indicated they expected to be back to 2019 levels of business travel by next year, while 11% said they would be back by 2023.

The long weekend around Martin Luther King Day in the U.S. used to be one of the bright spots in an otherwise slow travel quarter, with people using the extra day off to visit family, hit the ski slopes or escape the cold weather (and hopefully do some reflection on the legacy of the civil rights visionary while they were at it). This year, the vast majority of us — myself included — will instead be spending the Monday holiday where we have spent pretty much every day since March: at home. But the pandemic will end eventually and with vaccines now going into arms, people are starting to plan for a future when weekend getaways or even international sojourns are possible again.

Even after a furious end-of-year rally on vaccine optimism, U.S. airline and aerospace stocks remain in a fairly deep rut relative to broader benchmarks, reflecting the unpredictable nature of the recovery and what is likely to be a herky-jerky start to the year as the industry tries to capitalize on the inoculation rollout. The International Air Transport Association estimates that global traffic — measured in revenue passenger kilometers — won’t return to pre-Covid levels until 2024. Shorter routes should recover faster than international ones, which means the overall airline passenger count could rebound sooner but likely not until 2023, the trade group said. Industry heavyweights from Boeing Co. to Raytheon Technologies Corp. have echoed that sentiment.

Few sectors have faced more doom and gloom during the pandemic than aerospace. Getting back to a semblance of normality will be challenging.

And yet, there are signs of pent-up demand. Try searching for flights for a summer travel destination; it’s neither as easy nor as cheap as you might think given the current state of malaise in the sector. Visits to Delta Air Lines Inc.’s website to check travel booking options were up 40% in the fourth quarter compared to the three months ended in September, executives said Thursday on a call to discuss the company’s most recent results. Customers aren’t yet converting that browsing into ticket purchases, but there’s clear interest in traveling again once it’s safe to do so. That’s giving Delta the confidence to stick to the forecast that it will stanch its cash burn by the second quarter of 2021 and begin making money again by the summer. Ambitious? Perhaps. Delta anticipates the first three months of this year will resemble the last quarter of 2020. It expects to burn as much as $15 million in cash a day on average, offer 55% fewer seats for sale than it did in the same period in 2019 and generate only about a third of the revenue it did in pre-pandemic times.

While Delta has said business travel could be 10% to 20% lower over a certain period of time, CEO Ed Bastian bristled at the suggestion that corporate demand was permanently impaired. “I don't think we should be worried or ringing alarm bells relative to the future of corporate travel,” he said on the earnings call. “All indications are that corporate travel is ready to start coming back and it will come back pretty aggressively beginning in the second-half of this year.” 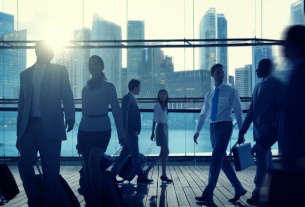