MCR said it would invest $10 million over the next year in StayNTouch.

U.S. hotel operator MCR Development said Monday that it would buy StayNTouch in a $46 million deal with cash and earnouts. The sale was prompted by President Trump’s executive order in March saying the company’s ownership by Chinese tech player Shiji Group could have threatened U.S. national security.

MCR, which calls itself the fifth-largest U.S. hotel owner-operator, oversees 92 properties. It intends to close the transaction later this month.

The New York-based MCR said it would invest $10 million over the next year in StayNTouch’s product development and technology, hire more sales and customer service employees, and use partnerships to expand its distribution globally.

MCR manages a mix of properties in 30 states and has been in the news for running the TWA Hotel that recently opened at New York City’s John. F. Kennedy International Airport, a 512-room property that runs on StayNTouch software.

MCR, which has a $3 billion portfolio, said it will run StayNTouch as a wholly-owned subsidiary and is looking to refresh the brand’s executive leadership. 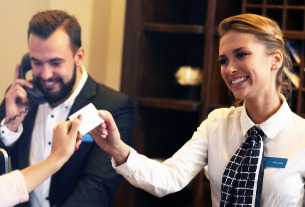