After passenger numbers plummeted earlier this year, air travel has taken a significant step forward. On Aug. 16, nearly 863,000 fliers passed through Transportation Security Administration checkpoints around the country, the highest figure since March 17. Though just one third of last year’s 2.5 million passengers, the traffic is sharply higher than the 87,534 who traveled on April 14 in the depths of the pandemic.

Commercial flights are down 43% in the United States, according to FlightAware.com, a service that tracks flights, but that is the best figure since the pandemic began, and up from a roughly 77% drop in April.

While the future of aviation remains uncertain — the industry is lobbying for more government funding to ward off future layoffs and route cuts expected when the Coronavirus Aid, Relief and Economic Security (CARES) Act funding expires Sept. 30 — here are five things we know about flying now.

After the pandemic hit, three of the four biggest airlines in the country — American, Delta and Southwest — vowed to block the sale of middle seats to provide more social distancing in the air. United Airlines was the sole holdout.

Now, American has joined United in selling all available seats on its planes as demand allows, while Southwest has extended its commitment to less density through Oct. 31. Alaska Airlines is also blocking middle seats through Oct. 31, though it says it may make exceptions for unforeseen circumstances, such as accommodating fliers from a previously canceled flight. JetBlue has extended its open-middle-seat policy through Oct. 15, and Delta is leaving adjacent seats open through Jan. 6.

Low fares may not be enough to lure many travelers

Traditionally, fall is a good time to look for cheap airfares and this year is no different.

“After Aug. 15, fares go down because college kids and younger children are going back to school,” said George Hobica, the founder of Airfarewatchdog.com, a website that finds flight deals. “They would stay down to Thanksgiving, and then after Thanksgiving to Dec. 14. You could set your almanac by it.”

This year, fares have been low all summer. According to the airfare prediction app Hopper, the current average price for a round-trip domestic ticket is USD 176, down 38% compared to the same time last year when it was USD 282.

Still, most of the 1,200 adult American travelers surveyed told the firm they won’t travel no matter how low the fares go. In the last survey, completed Aug. 9, 70% said no price cut would be large enough to get them to travel.

Holiday travel may be cheaper than normal

Typically, airlines hike fares beginning the weekend before Thanksgiving in anticipation of the rush to the skies for the holiday. Currently, an American flight from Chicago to Miami that sells from USD 75 in October, goes to USD 356 the week of the holiday.

This year, of course, is like no other, and the number of college students studying from home or families fearful of gatherings may depress holiday travel. Hopper found prices are 30% lower presently than they were in 2019 for Thanksgiving travel, with an average round-trip domestic ticket at USD 216.

“Right now, the priority for airlines is to make prices accessible and terms flexible,” said Hayley Berg, the economist at Hopper. “Customers are increasingly prioritizing flexibility in fares and their travel experience over anything else.”

Only Delta and Alaska have committed to reducing density in the forward cabin to 50%. (Southwest doesn’t have a first or business class; JetBlue is blocking six of 16 seats in its forward-class Mint cabins.) Fliers opting for the upgrade on other carriers — sometimes at very attractive prices — may very well find their wider, more spacious seats just inches from the passengers next to them.

Experts advise looking for airplane configurations that include single seat configurations. For example, on the Dreamliner that Mr. Hobica, the Airfarewatchdog.com founder, booked from Los Angeles to Newark, the seat configuration in business class was 1-2-1. (Bear in mind that carriers have the right to change aircraft per their contracts of carriage.)

“It’s a good way to fly if you don’t want someone next to you,” Mr. Hobica said.

While the airlines tout their HEPA filters, which scrub more than 99% of germs in the air, there has been very little data on the risks of catching coronavirus in-flight, even as evidence emerges that respiratory droplets containing live virus may linger in the air in indoor spaces. To date, no super-spreading events have been traced to a flight.

The question of whether a middle seat left open would improve a passenger’s odds of not getting sick compelled Arnold Barnett, a statistician and professor of management science at Massachusetts Institute of Technology, to look into it.

He found that on a fully loaded flight, the chance of contracting Covid-19 was one in 4,300. If the middle seat is empty, the risk falls to one in 7,700. Taking into account the possibility of spreading the virus to others not on the plane, he estimated the death risk to be one per 400,000 passengers on full flights and one in 600,000 with open middle seats.

“I do think there’s a difference, and I would rather fly the airlines that are being more cautious in this regard,” he added. 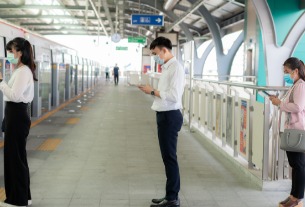