Two thirds of the new Airbnb users chose destinations within 480 km from home.

While Covid-19 has dampened cross-border and business travel, it hasn’t doused travel interest in road trips or less-crowded niche destinations. Airbnb has registered new users from more than 200 countries and regions making their first reservations on the home rental platform since March 11 this year.

As of August 11, the number of new users from China was the second highest, as cross-province travel has resumed in China and the recovery of domestic tourism is steadily quickening. The number of new Airbnb users in China was among the top three either as a source market and as a destination.

Since the launch of Airbnb’s confidence revival program in March, the company has seen obvious signs of recovery, said Tao Peng, president of Airbnb China. Through various programs such as livestreaming advance purchase on TikTok, Live in China, Weekend Player as well as cooperation with different brands, Airbnb inspires travelers to explore the beauty of nature, and discover new and joyful experiences on weekends.

The company’s data show that 2/3 of Airbnb’s new users chose destinations within 480 km from home. Most of the new users made the first reservation for domestic trips, and 75% of them made their booking within 30 days in advance, some even made a reservation on the day they set off (6%) or one day in advance (10%).

Between March 11 and August 11, Airbnb had registered 100,000 new guests in 12 countries, with US , China and France ranking the top three.

The top 10 source markets of the new users were the US, China, France, Britain, South Korea, Germany, Canada, Australia, Spain and Brazil.

The top 10 destinations for the new users were the US, France, China, South Korea, Britain, Canada, Spain, Italy, Australia and Mexico. 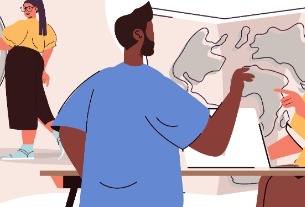