Each Eastern Miles member can purchase up to 10 sets of passes without limit to the number of usages.

On June 18th, a China mid-year online shopping festival, China Eastern Airlines launched the first weekend-unlimited flight passes in the domestic market. With a price of 3322 yuan (USD 469), passengers can take flights from China Eastern Airlines and Shanghai Airlines to major China cities, with no limited times on any weekend in 2020. The airline apologized later for the crash on its website due to high traffic, implying the success of this product.

Each Eastern Miles member can purchase up to 10 sets of passes without limit to the number of usages, but at the same time, there can only be three unused booked tickets. The pass doesn't cover tax, so passengers need to pay it additionally. Numerous restrictions also apply, and at the moment the pass is only available for purchase by Chinese citizens.

According to China Eastern Airlines, the product meets the travel needs of couples who live in separate cities, work or study in different places. It is also a good choice for high-frequency travel groups such as travel enthusiasts, photographers, middle-aged and elderly travel groups, helping to speed up the restoration of life and boost the consumption level of the whole industry chain of air tourism.

The promotion had gained much positive feedback from the public, and some industry insiders believe that it will also help the aviation market growth while attracting more "new" air travelers on board. According to a Chinese economist's calculation in 2019, around 1 billion people in China might have never traveled by plane, counting more than 70% of the total population.

Though first in China, unlimited flight pass is not a new idea. Since the first quarter of 2020, few airlines, namely AirAsia, Canada's Flair Air, VietJet Air and Bamboo Airways, had launched this type of product earlier in the hope of increasing the sales for some cashflow under the impact of COVID-19. 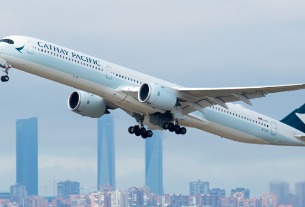 Flights to Hong Kong increased, but frequency still third of number to rival Singapore
©2022 广州力矩资讯科技有限公司 粤ICP备06070077号
Tell us more about yourself!