The move opens up a chance for U.S. airlines to return for the first time in four months.

U.S. carriers objected to China’s plan to ease its ban on foreign airlines starting June 8 -- a course-change that came a day after the Trump administration issued its own limit on Chinese flights.

“While the Chinese response to the Department of Transportation is a step toward parity for U.S. carriers, more is needed to achieve the goals of the agreement,” the trade group Airlines for America said in a statement Thursday.

Flights between the two countries are governed by an agreement first signed in 1980.

The Chinese embassy in Washington didn’t immediately respond to a request for comment.

China’s Civil Aviation Administration announced Thursday that foreign airlines excluded from an earlier pact will be able to operate one commercial passenger flight to China a week.

China’s CAAC didn’t name any countries or carriers, but the move opens up a chance for U.S. airlines to return for the first time in four months.

Flights can land in 37 Chinese cities, including Beijing, Shanghai and Wuhan, where Covid-19 first emerged. That list could change in the future, CAAC said.

If no passengers on a particular route test positive for coronavirus for three consecutive weeks, the operating airline can increase services to twice a week, CAAC said. However, a route would be suspended for a week if five passengers on the same flight tested positive. If 10 test positive, the route will be halted for four weeks. 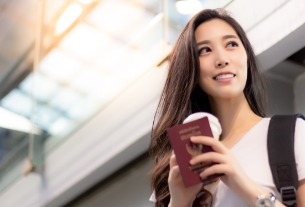 Taiwan considers resumption of foreign travel during second half of 2022