United Airlines could announce it will soon resume passenger flights to China, which is rebounding after strong measures brought the coronavirus outbreak under control. United would likely fly between San Francisco and Shanghai Pudong.

Demand is increasing for United as business resumes in China and its U.S. corporate customers re-establish supply chains. Various economic indicators estimate China’s output at over 70%. Yet these improvements occur as Chinese airlines are required to temporarily reduce international flights.

Despite United potentially resuming passenger service, overall U.S.-China flights will decrease in April as Chinese airlines reduce services. Chinese airlines plan to significantly increase flights in May. A United spokesperson did not respond to a request for comment.

Although there were headlines of China banning foreign visitors, this only applies to most previously issued visas. Individuals can re-apply for a visa “for essential economic, trade, scientific or technological activities or out of emergency humanitarian needs,” according to China’s Ministry of Foreign Affairs. Arrival quarantine measures vary and are changing. Corporates have generally curtailed employee travel, but there are exceptions for necessary trips.

Shanghai was United’s most-served destination in China. It even had two daily flights between Shanghai and San Francisco, its Asian gateway. The importance of San Francisco-Shanghai was underpinned by Apple, which bought 50 business class seats a day on the route, according to an internal United poster from 2019. 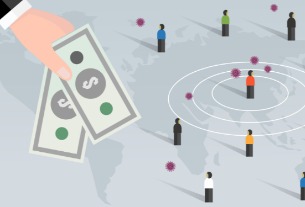