Passenger number was growing slower than flight capacity in the first five months of 2019 between the world’s two largest economies.

ChinaTravelNews - Ctrip’s airline big data unit FlightAI has examined the online travel platform’s internal data, supplemented by external data, to paint a picture of the air services between China and the United States in the recent year.

FlightAI tracked passenger demand, flight capacity, popular routes, airfare trends and passengers profile between the world’s two biggest economies from January 2018 to May 2019, and made projections on the market development for the second half of 2019.

Market overview: The China-US routes carried nearly 8.3 million passengers in 2018, 5% more year-on-year, but the growth rate was slower compared to that in 2017. Passenger number totaled 3.2 million in January to May this year, reflecting a slight decline compared to the same period of the year before. 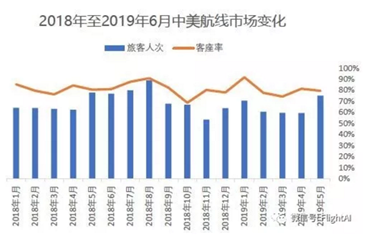 Top destinations: Ctrip's sales data show that Los Angeles, New York, San Francisco, Chicago, Boston and Seattle were the most popular US destinations. Air ticket sales for Los Angeles and Las Vegas recorded solid growth in the past year, at 7% and 10.8% respectively during the summer-autumn season, and 18.7% and 20.4% during the winter-spring season.

Ticket sales for flights to Chicago and Seattle, however, declined during those two seasons in 2018. The demand for Saipan also fell markedly for 2018 winter and 2019 spring.

Capacity: The total capacity of Sino-US aviation remained largely unchanged in the first half of 2018 when the trade war between China and US broke out. But the market started to turn from 2018 winter to 2019 spring. The capacity for China-US routes fell while the air capacity for flights to other major regions in the world continued to grow.

Flight searches: The search volumn on Ctrip for flights between China and US rose 29% in 2018 summer-autumn and ballooned by 57% in the two ensuing seasons, but stalled since the trade war broke out.

Passenger breakdown: From 2017 summer-autumn to 2018 winter-spring, the proportion of business travelers from China to the US gradually dropped. Passengers aged 28-45 comprised the largest bulk of travelers on the Sino-US routes, at 38%, and the group aged 46-65 was the next largest segment.

For the past two years, the demand and supply for Sino-US routes grew in tandem, but passenger number fell short of flight capacity in the first five month of this year.

Air ticket sales for US and Europe flights were growing at similar rate in the first two months of 2018, but the increase in US flight sales significantly slowed to only one-third of that for Europe flights.

The net airfare trends for Chinese carriers' US flights were in similar directions from 2017 summer-winter to 2018 winter-spring. The average price gap between a round-trip ticket and a one-way ticket was around RMB 600, with round-trip airfare showing greater fluctuation.

This shows that airfare is just one factor for flight decisions. Other factors include the fluctuation of currency exchange rates and the long process of US visa application.

About 52.7% of the passengers on the long-haul intercontinental US-China flights chose non-stop services, and the remainder 47.3% took connecting flights. Passengers tended to opt for non-stop flights in summer-autumn more than they did in winter-spring.

Some 61.7% of the passengers traveling to US purchased round-trip tickets, 26.5% of them bought one-way tickets and the remainder 11.8% bought interline tickets. The number of passengers taking interline options on the Sino-US routes increased at the 2017 summer-autumn and 2018 winter-spring seaosns, while passengers with one-way or round-trip tickets decreased over the same period. It shows that travelers were becoming increasingly flexible in their itinerary planning.

The Shanghai-Los Angeles route is one of the most important routes between China and the US. Its performance is symbolic of the trends for Sino-US routes – the proportion of business travelers was declining, the largest segment aged 28-45 shrank in 2018 summer-autumn but expanded again afterwards, while the segment aged 46-65 continue to dwindle.

The number of round-trip ticket holders on the Shanghai-Los Angeles route was proportionately higher than other US routes, though this was in decline in 2018.

With ample capacity, the Shanghai-Los Angeles route was served by a higher proportion of non-stop flights, though the proportion has been shrinking since 2018, with more passengers opting for indirect services. This may be a sign that travelers have become more price-sensitive.

So far in the second half of 2019, Ctrip’s air ticket sales have increased 4% year-on-year, which is higher than the growth rate of the first half of the year. By comparing the Sino-US flights monthly sales data in the second half of 2018 and 2019, the researchers projected that starting from this September, the sales growth will start to outpace that of the same period in previous year.

By comparing the change in the conversion rate from searches between the corresponding periods of 2018 and 2019, the researchers projected that the conversion rate of 2019 will be at a similar level as that of 2018 after September, except for spikes at the peak lunar Chinese new year period and the summer vacation season. Based on the steady growth in search for US flights in the second half of 2019 and anticipated increased in air ticket sales, the researchers projected that the Sino-US aviation market will gradually recover.

Overall, the growth of the Sino-US aviation market has been slowing, affected to a certain extent by the evolving political and economic relationships between the two countries. But the researchers see that airline companies especially the Chinese carriers are still growing their services in this market. The researchers believed that the demand and supply of Sino-US flights are changing, but they are still relatively optimistic looking at the available data. (Translated by Jerry)