Home > > Ctrip Chairman: The potential of China’s inbound tourism market is yet to be exploited

Ctrip Chairman: The potential of China’s inbound tourism market is yet to be exploited

Ctrip’s James Liang believes that China will enjoy more opportunities in the tourism market if it can extend visa-free policies to more countries.

“Despite state-of-the-art infrastructure and rich tourism resources, the development of China’s inbound tourism has been seriously constrained due to visa policies. In 2017, China made USD 50 billion from inbound tourism, much lower than the USD 200 billion that the United States received for inbound tourism,” said James Liang, co-founder and executive chairman of Ctrip, at the ITB China forum on May 16.

Statistics show that the number of overnight inbound visitors in China totaled 60.74 million in 2017, a bulk of them were travelers from Hong Kong, Macao and Taiwan for business purposes. The number of foreigner visitors to China was less than 30 million, and has seen very little growth in the previous few years.

China only registered 29.71 million inbound travelers compared to the 75 million for the United States. This contrast is even more striking given that China is about the same size as the US, but has four times their population, he said.

James believes that the potential of China's inbound tourism is yet to be explored. With rich tourism resources and superior infrastructure as well as safety for tourists in urban areas, China will enjoy more opportunities in tourism if it can extend visa-free policies to more countries. 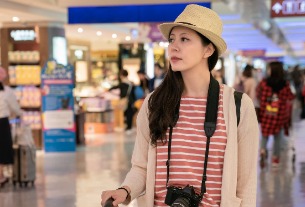 Rich shoppers stuck in China fuel an unlikely boom in duty free
©2020 广州力矩资讯科技有限公司 粤ICP备06070077号
Tell us more about yourself!