Asia’s biggest airshow kicks off in Singapore this week amid a rout in the global financial markets. You can’t tell any of that looking at plane orders for Airbus Group SE and Boeing Co.

The heydays of multi-billion orders from India and nations in Southeast Asia is giving way to concerns about airlines in the region delaying delivery of planes. The lone bright spot -- China.

China Southern Airlines Co., Air China Ltd. and other carriers in the nation will require about 6,330 new planes worth $950 billion in the next two decades, according to Chicago-based Boeing. That’s about 17 percent of the global total. During last year alone, Chinese airlines and leasing companies announced orders for some 780 planes valued at about $102 billion.

“China’s aviation outlook is not just bright, but arguably the strongest it has been in its history,” said Will Horton, a Hong Kong-based analyst at CAPA Centre for Aviation. “Chinese airlines are waking up to their potential.”

As China re-balances its economy toward consumer spending after its slowest annual growth rate in 25 years, the government is trying to encourage more air travel by building 66 airports as part of its current five-year plan. That good news for the aerospace and airline industries contrasts with overcapacity and losses among airlines in Southeast Asia and India.

From Brazil’s Embraer SA to Bombardier Inc. of Canada, aerospace manufacturers will chase hard to come by orders during the Singapore Airshow, which starts Tuesday. United Technologies Corp.’s engine-maker Pratt & Whitney will open its engine fan-blade manufacturing facility in the city state this week. No major Chinese airline executive will be at the show. China’s future as the world’s biggest travel and aircraft market and a gradual shift in momentum toward Asia are among themes aerospace manufacturers and airlines will discuss.

Airbus’s and Boeing’s 20-year outlooks are dependent on Asia Pacific for new fleet sales, with estimates that 39 percent of their total deliveries will be to that region through 2034. 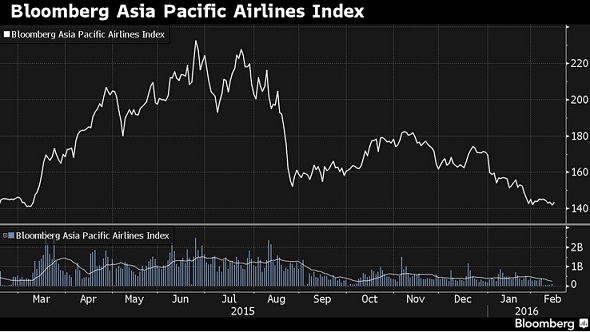 China is poised to displace the U.S. as the world’s biggest aircraft and travel market in two decades, according to Boeing. The Chicago-based company announced its largest industrial investment in China and received $38 billion in orders from its carriers and lessors. Airbus already has a final jet assembly facility near Beijing.

“The overall Chinese economy has slowed down," Tony Tyler, head of the International Air Transport Association, said in Singapore Sunday. "However, air travel in China has remained quite robust."

It’s a different story in Southeast Asia and India, two other regions that saw a surge in air travel and aircraft orders. Many carriers are mired in losses, some have shut shop and a few have already delayed delivery of new planes. India is home to a fare war and the industry has long remained unprofitable.

Preliminary results for 2015 show average earnings before interest and tax margins for Southeast Asian carriers is at 0.3 percent, the lowest among all regions except Africa, Tyler said Monday. In comparison, carriers in the Middle East average at 10.8 percent, Europe at 5.9 percent and North America at 13.8 percent, Tyler said.

Airlines in this region have over-ordered aircraft, according to Shukor Yusof, founder of Endau Analytics in Malaysia. Given Airbus’s bigger exposure to budget airlines in Southeast Asia, the European planemaker has a higher risk of having to confront deferrals or cancellations, Shukor said.

Airbus has the greatest Asia Pacific concentration in its narrow-body backlog at 30 percent, 15 percentage points higher than Boeing’s, Bloomberg Intelligence analysts George Ferguson and Ian McFarlane wrote in a report this month. It’s most exposed to carriers in Southeast Asia and India, with Lion Air (463 aircraft), Indigo (430) and AirAsia (307) accounting for 51 percent of Asian orders.

The Bloomberg Asia Pacific Airlines Index has fallen 16 percent this year amid concerns of a global economic slowdown even as oil prices are down. Boeing shares have fallen 25 percent and Airbus has declined 17 percent.

“As long as fuel prices stay low, disposable income is with the consumer and air travel is still in reach,” said Mark Martin, founder of Dubai-based Martin Consulting LLC.

That’s prompting China to allocate about 77 billion yuan ($12 billion) for investment in civil aviation this year. The nation is planning to build new airports to boost the national total to 272 by 2020, according to a summary of 2015 figures released by the aviation regulator.