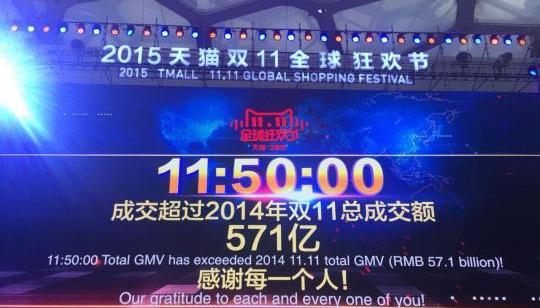 Singles Day is not a traditional festival, but e-commerce giant Alibaba has been pushing November 11 — a date heavy on ones — since 2009 as it looks to tap the country's huge, and expanding, army of Internet shoppers.

At first it was marketed as an "anti-Valentine's Day," featuring hefty discounts to lure singletons and price-sensitive buyers. But with sales hitting new highs year after year, it has become a highly lucrative business opportunity embraced by digital retailers.

Competition for a slice of China's online population of more than 668 million is turning increasingly fierce.

James Bond actor Daniel Craig, and Hollywood star Kevin Spacey — in his role as President Frank Underwood from the Netflix series "House of Cards" — were just two of the galaxy of foreign and domestic stars involved.

The company's efforts paid off in spades, with shoppers splashing out 91.2 billion yuan over the course of the sale.

Last year's total of $9.3 billion was matched a little more than 12 hours after the promotion's midnight start.

In comparison, desktop sales for the five days from Thanksgiving through Cyber Monday in the United States last year stood at $6.6 billion, according to Internet analytics firm comScore.

"The 2015 sale eclipsed last year's final results in a little over half the time," the company said.

In an earlier release, Alibaba's chief executive Daniel Zhang said: "The world will witness the power of Chinese consumption on November 11."

The task of putting customers' purchases into their hands is huge. Alibaba said its logistical arm and its partners would use more than 1.7 million personnel, 400,000 vehicles, 5,000 warehouses and 200 planes to handle deliveries.

The event has received vocal support from the government at a time when China's economic expansion is slowing and the government is trying to transform its growth model into a more sustainable one driven by consumption.

Highlighting the need for the transition, the mega-spending spree came as the government announced industrial output growth had fallen to a six-month low in October.

The 5.6 percent rise is the latest indicator that China's expansion is slowing after years of breakneck growth.

Premier Li Keqiang's office phoned Alibaba Chairman Jack Ma hours ahead of the promotion, "congratulating and encouraging the creation and achievement of the 11.11 event," said a posting on a social media account of Tmall.

Internet users revelled in their acquisitions yesterday, though many lamented that they had spent far too much.

"I can only afford to eat dirt for the next half year," said a user on Weibo, adding that she had bought 42 items.

Some people also expressed concerns about notorious fakes. "Good luck. Hope you guys will not get phoney products or things that turn out to be useless," a Weibo user said.

A Shanghai woman surnamed Xu said she spent about 3,000 yuan on clothes and other items for her baby, because she and her friends "love getting involved" in the annual celebration of consumerism.

"Singles Day is about participating in the festivities," the 30-something mother of one told Shanghai Daily.

"My friends, some of whom are also young moms like me, like to swap ideas on what we plan to buy," she said.

A woman from the city's Yangpu District said she was less impressed with the bargains on offer than she was with the efficiency of the delivery service.

"I ordered food items from Tmall as soon as the promotion started at midnight (on Tuesday), and they were all on my doorstep at noon," she said.

"Things have certainly improved on that score in recent years. I just wish all of my other purchases had arrived so promptly," she said.

JD.com said that as of 5pm Wednesday, its orders had nearly tripled from last year to 20 million. More than 70 percent of them were placed via mobile devices, while Guangdong, Beijing, Jiangsu, Shanghai and Sichuan led the way in terms of sales by geographical area.

Electrical goods retailer Suning boasted of similar successes. As of 8am, combined sales through its online and offline stores were almost 300 percent up on the same period of last year, it said.

Not everyone was quite so happy, however.

Shanghai office worker Sammi Wang said she felt like she'd missed out on the bargains and the fun.

"By the time I got online about 7am everything I wanted had already sold out," she said.

"I feel a bit jealous of all the other people who bagged the good deals."