Airlines around the world are slashing more flights into the new year as the worst crisis to hit the industry shows no sign of letting up.

Europe remains the region hardest hit by curbs on travel, with carriers operating at about a quarter of their capacity before the start of the Covid-19 pandemic, according to John Grant, an analyst at aviation data group OAG.

Even China, which spent the latter part of last year flying more or less as normal, has seen a 12% reduction in flights as of Jan. 18, he said.

“It’s not looking good, and if anything it’s moving backward,” Grant said at a webinar on Wednesday. “We’ve just got to stoically accept that if you want to travel internationally you have to get some sort of certification.” 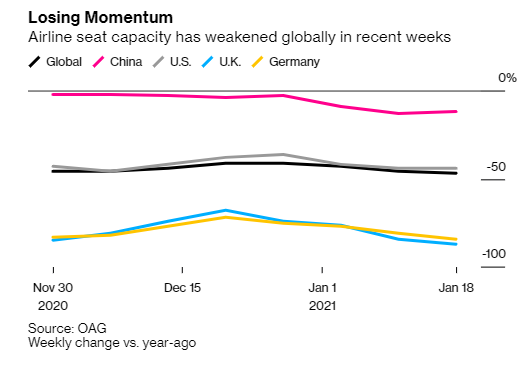 OAG’s figures paint a harrowing picture for an industry already on its knees after border closures and other travel restrictions first pushed bookings off a cliff last year. Hopes for a recovery this summer are in peril, after a resurgence in cases and the discovery of more transmissible new variants in a number of countries.

The arrival of vaccines offer some hope for the aviation industry, though rollouts take time and should be seen as just one solution for getting tourism back on its feet, according to the analyst. A full recovery may take as long as four more years, Grant said.