The recovery of passenger demand continued to be disappointingly slow in October, according to the International Air Transport Association (IATA).

Total demand measured in revenue passenger kilometers or RPKs was down 70.6% compared to October 2019. This was just a modest improvement from the 72.2% year-to-year decline recorded in September. Capacity was down 59.9% compared to a year ago and load factor fell 21.8 percentage points to 60.2%. 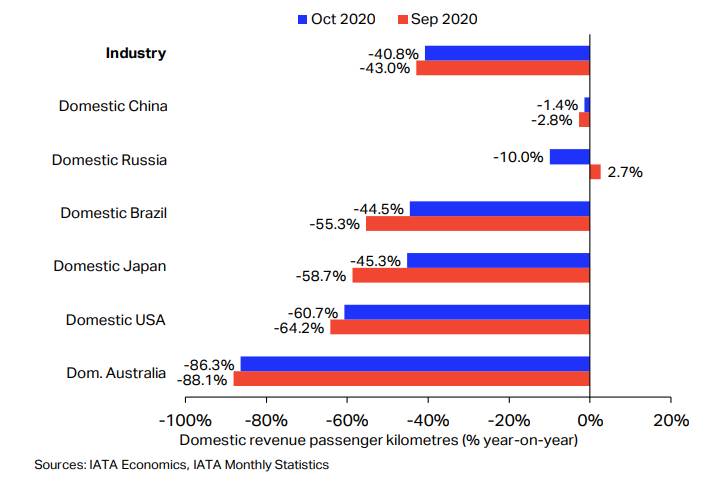 Domestic demand drove what little recovery there was, with October domestic traffic down 40.8% compared to the prior year. This was improved from a 43.0% year-to-year decline in September. China’s domestic market have nearly recovered, while most others remain deeply depressed.

China’s domestic traffic was down just 1.4% in October compared to October a year ago. The domestic economy was close to normality and low fares and so-called "all you can fly" deals boosted demand.

Asia-Pacific airlines’ October traffic collapsed 95.6% compared to the year-ago period, which was unchanged from September. The region continued to suffer from the steepest traffic declines. Capacity plummeted 88.5% and load factor sagged 49.4 percentage points to 30.3%, the lowest among regions.