ChinaTravelNews, Ritesh Gupta – Leading Chinese hotel company Huazhu Group is bullish about its expansion plans, with its sustained focus on tier-3 and other lower-tier cities standing out.

Sharing details of the group’s performance and its future plans during the Q3 earnings call, Hui Jin, President, Huazhu Group mentioned, “At the end of October, there were roughly 44% of our net openings of hotels come from the tier-3 and below cities, close to 50% of our net openings.”

The multi-brand hotel group mentioned that tier-3 and below cities accounted for 50% of the total pipeline at the end of October. This went up from 45% for tier-3 cities at the end of Q1. This trend meant that the percentage of tier-1 and tier-2 cities in the overall pipeline breakdown has gone down. For tier-2, it decreased from 40% in March to 37% by October, whereas for tier-1, it went down from 15% to 13% by October.

By the end of Q3, the group had around 2300 unopened hotels in the pipeline. As for this year, Huazhu maintained its gross opening target of about 1,600-1,800 hotels.

Hotel companies in China have been evaluating how the industry structure is likely to evolve and accordingly assessing opportunities for growth coming out of the pandemic.

As indicated by Ji Qi, Executive Chairman and CEO of the group, Huazhu is confident of achieving a target of 10,000 properties by 2022, from the current level of 6507 hotels. He mentioned that the chain penetration of China's lodging industry is set to accelerate, going by what happened post-SARS in 2003 and the financial crisis in 2008. 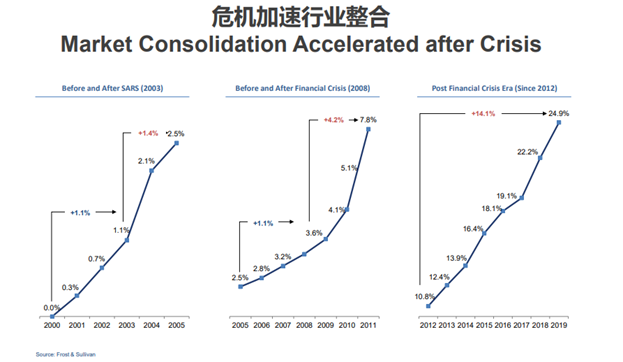 In terms of brands marked for penetration into the lower-tier cities, Jin mentioned that the plan is to establish both middle-scale brands and economy brands.

Referring to what major online travel companies like Trip.com and Meituan have also indicated in the past week or so, Jin also highlighted the potential of these areas. Since the demand for hotels surged in the domestic market, the overall booking recovery continues to be faster in lower-tier cities. Jin also referred to the rising “urbanization rate” in lower-tier cities. The propensity to spend in the coming years makes these parts of China an attractive proposition. He also justified a reason behind going ahead with non-economy brand in these areas. “ …until now, what we have observed, that actually in the lower-tier cities, our middle-scale hotels performed pretty well. And especially, for example, our JI Hotels, actually, their performance has exceeded our previous expectation,” said Jin.

For expansion, in addition to cities, another aspect that needs to be considered is the model and brand chosen.  The group has particularly stressed on the significance of pre-operating expenses this year.

The combination of franchise model and lower-tier cities seems to be a major part of the plans for the future. At the end of 2019, Shanghai, Beijing, Guangzhou, Shenzhen and Hangzhou accounted for 26% of the entire portfolio. These cities feature only 24.5% of properties (1108 properties) under the “manachise” model (under which Huazhu appoints its on-site hotel managers and collect fees from franchisees). In comparison, these top-tier cities made up for 35% of the total lease and ownership category properties (total 688). Huazhu’s CFO Teo Nee Chuan also referred to the significance of this model during the call. He explained that RevPAR in lower-tier cities has been “pretty good” considering the recovery in the past few months and the gap when compared with higher-tier cities “is actually narrowing”.

He pointed out that cost in case of hotels are related to rental, people cost and depreciation and amortizations. “…the rental cost in the lower-tier cities are much lower. The people costs are much lower, while the depreciation and amortizing costs are relatively the same compared to the higher tier cities,” he said. Also, from franchisees’ perspective, he said they aren’t keen on comparing the performance in bigger cities, rather they are lookout for “better yield of per square metre” for their property. And for Huazhu, he said, “…(our) operating leverage is very high because the way we operate using the centralized operating platform. Our incremental cost compared to our fee revenue is minimal, so this is actually a win-win situation for both the franchisees as well as Huazhu.”

Delays in mid-scale and upscale brands

The group added approximately 750 hotels, encompassing 64787 rooms, in the economy segment in the first nine months of this year. Economy hotels count stood at 4226, accounting for 64.9% of its entire portfolio, and growing it from 62% at the end of last year. Economy hotel brands of the group are HanTing Hotel, Hi Inn, Elan Hotel, Zleep Hotels and Ibis.

The mid-scale hotel brands are Starway Hotel, JI Hotel, Orange Hotel, Ibis Styles and Mercure. The number of brands in the upper mid-scale, upscale and upper-upscale is 11, including Steigenberger.

As to why the opening of mid-scale brands hasn’t kept pace with the target as indicated in the beginning of this year, Jin said there were delays owing to the pandemic. “…also there is a possibility that a lot of franchisees who used to focus on the middle to upscale hotels, but due to the heavy CapEx (capital expenditure) and the impact by the COVID-19, they're probably going to delay their demand,” he said.

As for stressing on quality while expanding, the group shared that it is removing soft brand hotels that do not meet the quality standards and also chose to raise the entry benchmark of soft brand hotels. For example, referring to the Starway brand, Jin said the group has been stepping up the entry threshold for the Starway franchisees and also increased the quality standard as well. “So that’s another reason for this particular brand to have less openings this year,” said Jin, who added the openings for mid-scale brands are expected to return to the normal pace next year.

One of the reasons behind improved liquidity is due to positive operating cash flow in China ~RMB1.2 billion in Q3. Huazhu has posted a positive EBITDA since May.