Although some Asia Pacific nations such as China have achieved strong recoveries in domestic air operations in the face of the ongoing Covid-19 global pandemic, intra-regional international flights are running at a small fraction of last year’s level.

Only 11 airlines operated more than 10 intra-regional international services in Asia on 10th August, and United Airlines came in at number three with 15 flights, compared with 21 last year. Singapore Airlines – which has no domestic market to fall back on at its Changi Airport hub – managed only 11 flights using seven aircraft, compared with more than 200 with 76 aircraft on the equivalent day last year.

Percentage of passenger jets in storage continues to fall

Airlines are likely to pass by the end of this week the milestone of collectively holding fewer than one third of their passenger jets in storage as the gradual recovery in global flight operations continues.

Behind this topline figure, narrrowbodies were clearly most in demand as the mainstay of domestic and intra-regional trunk routes, with only 29% of the global fleet remaining inactive. Meanwhile 37% of regional jets and 43% of widebodies are yet to be returned to duty.

As of 10th August Cirium classified a total of 8,750 widebodies, narrowbodies and regional jets as having in-storage status, while nearly 17,500 were in service. More than two thirds of the global fleet has been in storage since late March.

By mid-April almost 11,000 single-aisles had been placed into storage, but this figure has since declined to fewer than 5,000 (including nearly 400 still-grounded 737 Max aircraft). 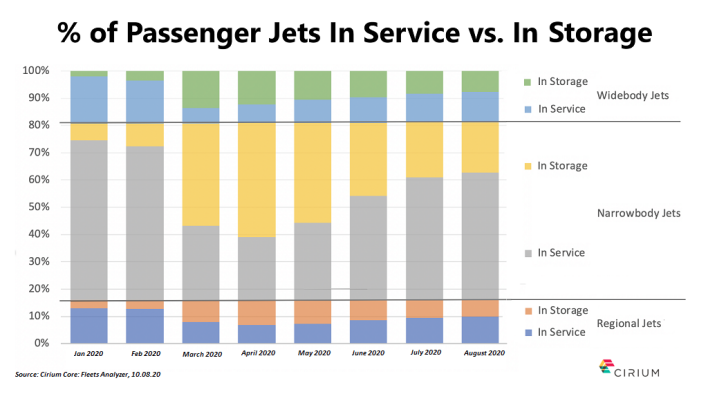 Despite the recovery of in-service numbers, average flight hours per aircraft per day remain well down compared with the equivalent date last year. On Sunday 9th August 2020, Boeing 737s flew an average of 7.22 hours while A320 Family types recorded 7.13, representing declines of 23% and 24% respectively, compared with Sunday 11th August 2019.