Chinese hotel chain Huazhu registered an 11.4% rise in net revenue in 2019, but the company's same-hotel data on RevPAR, ADR and Occupancy all saw declines. Soft brands have dragged down the overall comparable performance, for same-hotel RevPAR and ADR will do a much better job if soft brand performance were excluded. The company's leased and owned hotels were slowing down last year while the manachised and franchised properties were delivering better growth. But it is still worth noticing that the manchised and franchised hotels made a much smaller contribution to Huazhu's total revenue in 2019, representing only 29.8% share of the company's annual net revenue. 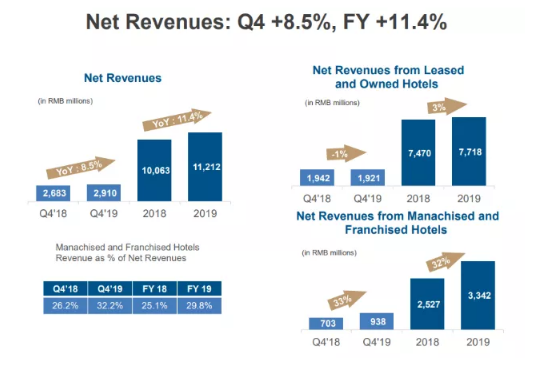 Net income attributable to Huazhu Group for the full year of 2019 increased 147.1% to RMB1.8 billion (USD 254 million), and non-operating incomes like gains from equity investments contribute significantly in the company's annual profit.