The China-Japan aviation market is booming. For anyone thinking about flying to Japan, this means more choice in flight times, more choice in destinations and more choice of airlines. In October 2019 there were 23% more flights leaving China and destinated for airports in Japan than in October 2018. This equates to an extra 2200 flights over the month or an average of 71 extra flights each day.

The majority of extra flights are being operated by Chinese airlines. Spring Airlines is the biggest protagonist in this effort with 381 additional flights. All the other major Chinese airlines, as well as plenty of the smaller ones, have also joined the fray with each of six airlines adding at least 100 flights or more in October 2019 compared to the previous year.

While the Chinese airlines are keen to both stimulate the market and catch a share of a growing market, Japan’s major carriers have resisted adding capacity and making the most of the market growth. The largest – and only - Japanese airline to add flights is Spring Airlines Japan which increased the number of flights from China to Japan by 120, almost doubling its capacity in the market. In contrast, All Nippon Airways has seen the number of flights reduced by 4 over the month, Japan Airlines has dropped a single frequency and Peach Aviation has the same number of flights as in October 2018.

The new air services include 24 new routes between the two countries, bringing the total number of routes to 120. These connect 37 Chinese airports with 22 Japanese airports. However, the new route additions are highly concentrated on Osaka Kansai International Airport (KIX). Almost two-thirds of the 2200 new routes operate to KIX, demonstrating that while Japan has been considered a mature market, it is still possible to stimulate growth if the airline proposition is the right one. KIX was among the first of the Japanese airports to be privatized with ownership passing to a consortium made up of Vinci Airports, Orix Corporation and companies from the Kansai region in 2016. If this surge in new routes is a consequence of this and demonstrates the ability of an airport to become more proactive in its air service development, this is surely a sign of the success of this particular privatization. 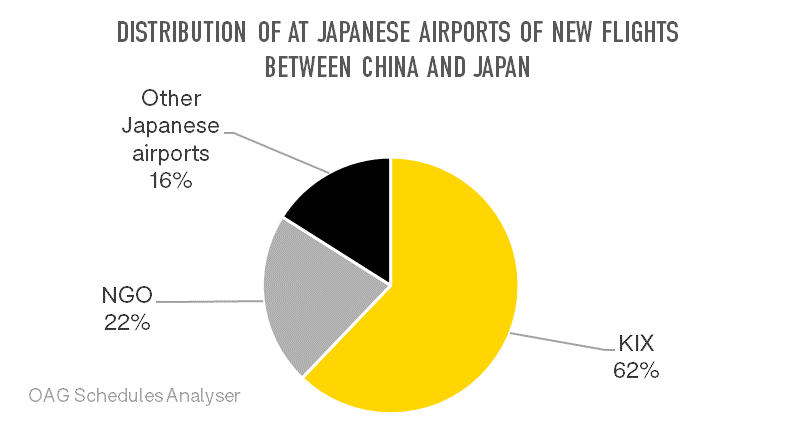 With the new routes, there are six Chinese airports which gain their first Japan air services: Changzhou (CZX), Haikou (HAK), Kunming (KMG), Nanchang (KHN), Wenzhou (WNZ) and Zhangjiajie (DYG). All located in southern China, residents living in or close to these cities will now find it easier than ever to travel to Japan. 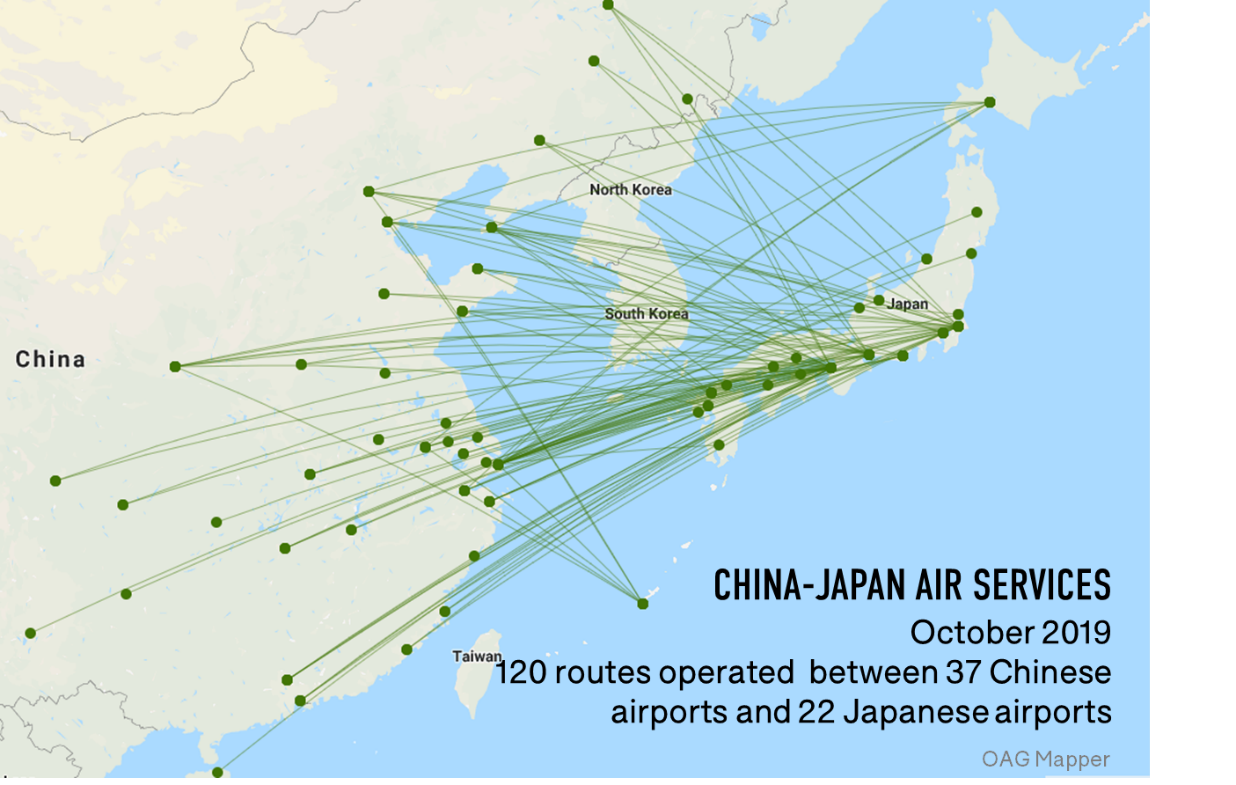 Elsewhere in China, the biggest beneficiaries of the new routes are the second-tier airports with each of the following airports adding 100 or more flights to Japan to their October schedule compared to last October: Tianjin (TSN), Xi’an (XIY), Hangzhou (HGH), Qingdao (TAO), Dalian (DLC), Shenzhen (SZX), Ningbo (NGB) and Nanjing (NKG). Guangzhou (CAN) also adds 146 flights but the other primary airports, Beijing (PEK) and Shanghai Pudong (PVG) add only 30 and 78, respectively. 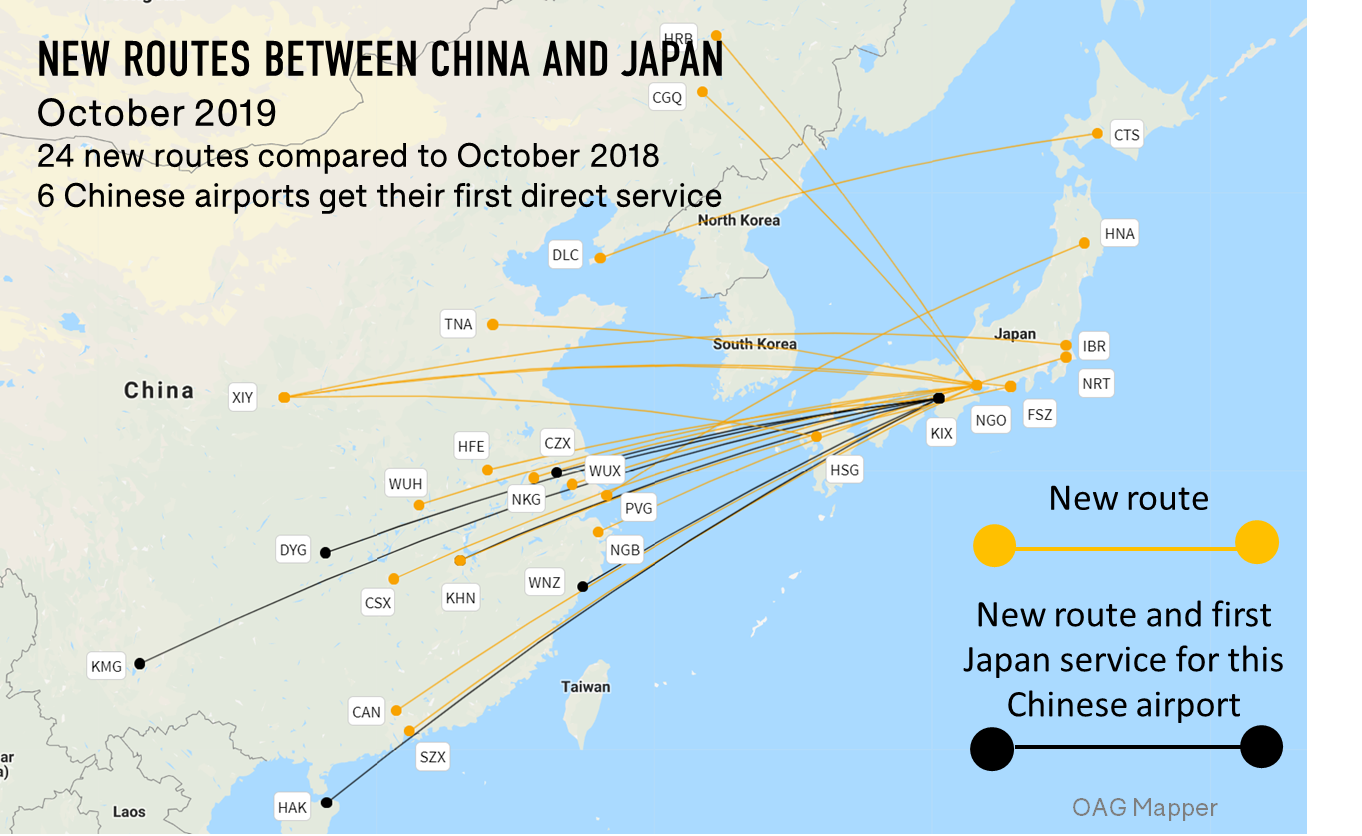 This step-change in air services is good news for Japan which announced a drive to increase inbound tourism. The target of 40 million visitors by 2020, to coincide with Japan hosting the Olympics, appeared challenging when first announced. This would be more than double the number of arrivals in Japan in 2015. However, 2018 saw 31 million visitors to Japan and with China, the fastest and largest growing outbound market on the planet, the dramatic increase in air services from China will surely help it reach its target. Japan has been easing visa restrictions for Chinese visitors since 2016, making it easier especially for repeat visits. While this makes visiting Japan easier, the rising Yen in recent times has made the country somewhat more expensive. Clearly, this has not been enough to put off the growing numbers of Chinese visitors who want to visit this unique destination.