Luxury hotel operator Shangri-La Asia Limited announced its interim results for the six months ended June 30, 2019 with a 20.1% drop in consolidated operating profit (down by USD 16.2 million). Total profit including non-operating items declined 24.7% to USD 115.1 million during the time.

Revenue for the first half of the year rose 1.7% year-on-year to USD 1,195 million. Hotel room revenue took up USD 533.97 million, food and beverage sales amounted to USD 432.82 million, and ancillary services accounted for USD 58.86 million. Other services including hotel management, property development for sales also contributed to the total revenue. Total revenue from Mainland China hotel properties for the six months ended 30 June 2019 decreased by 8.4% to USD 380.4 million, accounting for around 37% of the company's hotel properties revenue during the reporting period. 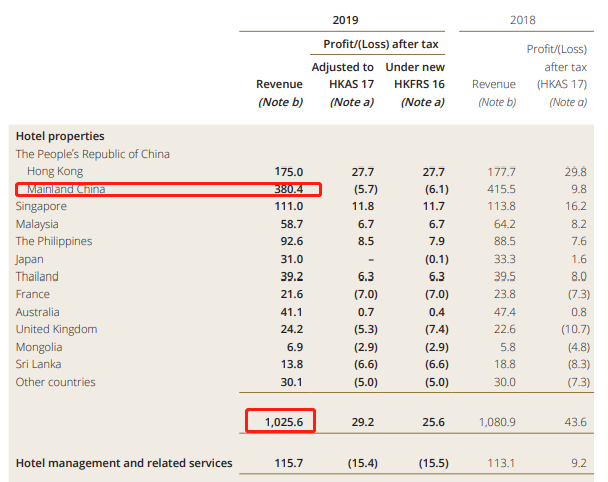 The company had equity interest in 45 operating hotels in Mainland China as at 30 June 2019.

For Mainland China, the occupancy was 64% for the six months, down by one percentage point, compared to 65% of last year. The RevPAR was USD 79, a decrease of 8%, compared to USD 85 for the six months ended 30 June 2018. The China hotel market proved challenging as uncertainties in trade negotiations between China and the US lingered throughout the period. Shangri-La was also impacted by currency fluctuations as the RMB depreciated roughly 6% against USD for the same six-months period compared to 2018.