The annual ranking was published by WPP and Kantar on May 6 in Beijing, with Alibaba crowned the most valuable brand in China for the first time boasting brand value growth by 59% year-on-year to USD 141 billion. The total value of the listed brands grew a record 30% to USD 889.7 billion.

The total value of airline brands in the ranking reached USD 12.49 billion, up by 7%, following a 5% increase a year ago. With the addition of Shenzhen Airlines, the BrandZ China Top 100 now includes five airline brands. 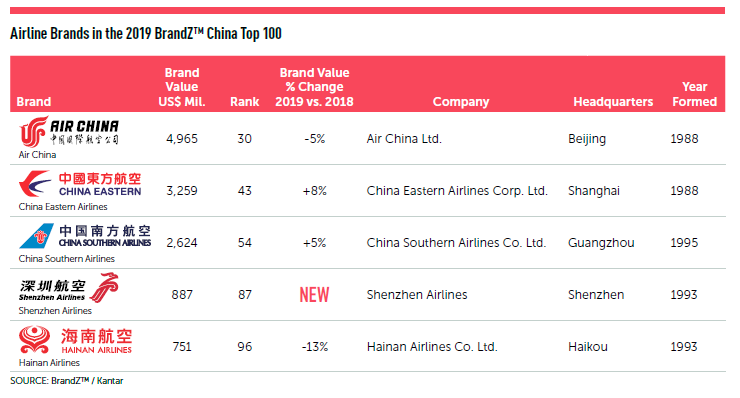 Air China and China Eastern Airlines are the remaining brands that have a significant presence outside of China in the ranking of Top 10 by overseas presence. They ranked seventh and eighth, respectively.

Hotel brands face new competition, but the hotel category increased 32% in value, a strong performance that followed a 13% rise a year ago. Of the two hotel brands represented in the BrandZ China Top 100, Hanting (from Huazhu Group) rose 58% and Home Inn rose 6% in brand value.

The growth occurred despite pressure in the budget segment of the market, and more competition from Chinese and foreign brands.

Travel remained robust, with outbound travel increasing 15% during the first half of 2018, when over 71 million Chinese traveled abroad, according to China’s Ministry of Culture and Tourism. Inbound travel rose 11.4% during the same period, when 23.8 million overseas visitors came to China.

However, growth potential has attracted many competitors, such as Meituan Dianping, which completed an IPO, and Tongcheng-Elong a travel website that completed an IPO with backing from both Tencent and Ctrip.

Alibaba operates a travel platform called Fliggy. Didi Chuxing, the ride-hailing brand, entered the hotel-booking business through an arrangement with Booking.com. Ctrip, which has focused primarily on serving Chinese travelers, is positioning to meet the needs of overseas visitors to China, with its acquisitions of Trip.com and Skyscanner, a recommendation site.