After a fairly flat 2016, the industry resumed its historic pace of growth in 2017 fueled by Disney, China, and Indoor Entertainment Centers. The top 25 theme parks expanded volume by 4.7%.

The major theme park operators had an outstanding year with 8.6% overall growth from 438 million to 476 million led largely by properties in China, where attendance swelled by nearly 20%. China now generates about a quarter of the major operators’ overall attendance.

Three out of the Top 10 Theme Park Groups Worldwide in 2017 by attendance were from China: OCT Parks China (42.88 million), Fantawild (38.50 million) and Chimelong Group (31.03 million). The three groups showed the greatest growth momentum in attendance with OCT registering the largest rise at 32.9% YoY. 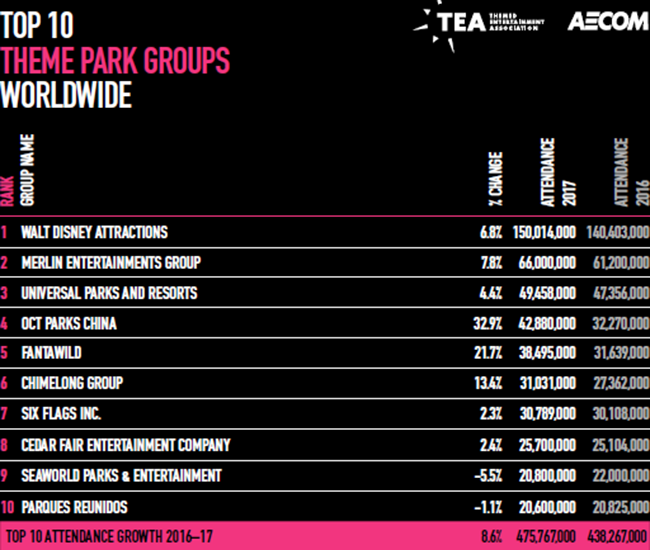 Hong Kong Disneyland saw attendance stabilizing at 6.2 million in 2017, where previously it had been declining for two years, likely due to minimal reinvestment. The new Iron Man Experience that opened in early 2017 helped drive new traffic and stabilize the situation. Ocean Park Hong Kong saw an attendance decline again in 2017, of about 3%.

On the Mainland, the biggest success story is Shanghai Disney Resort, which drew 11 million attendance in 2017 - its first full year of operation - coming in ahead of expectations, with a continued good performance so far for 2018. The markets have responded strongly in terms of general popularity, length of stay and repeat visitation.

OCT Parks and Fantawild are two chains that posted strong growth for 2017 as well. This is largely attributable to capital investment.

The forecast that China would become the largest theme park market in the world by 2020 is still on track, especially with Universal Studios Beijing due to open around that time, and many other projects still in the pipeline.