Local governments, especially those outside mega cities like Beijing, Shanghai and Guangzhou, spent at least 8.6 billion yuan ($1.3 billion) subsidizing airlines in 2016, mostly for them to start direct services to far-flung places such as New York and Paris, according to data compiled by Civil Aviation Data Analysis. These payments, to both Chinese and foreign carriers, equate to close to half the 19.49 billion yuan in profits earned by the top four mainland-based airlines last year, according to the consultancy known as Cadas.

As economic growth and rising incomes led China to become the largest source of outbound travelers, major airports in Beijing and Shanghai have been stretched beyond their capacity. The top three state airlines -- Air China Ltd., China Eastern Airlines Corp. and China Southern Airlines Co. -- have depleted their quota for direct services to foreign destinations from major Chinese cities, and countries including Australia and the U.K. have allowed more flights to and from China. 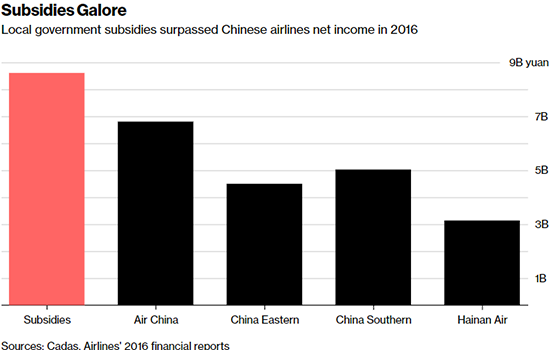 The battleground for long-haul flights has shifted to lower-tier cities, where state and private carriers like Hainan Airlines Holding Co. are offering international flights at low fares. Such flights would hardly make any money without government subsidies, according to Cadas.