Some airlines are willing to sell more first-class tickets through auction. Since the price is lower, travellers also prefer to pay an upgrade. It is estimated that more airlines will join in.

Airlines are sold on using auctions to peddle more premium seats rather than giving them away free to loyal customers.

More than 30 airlines around the world now offer auctions to sell upgrades to first-class, business-class or premium-economy seats. More will be launching auctions in 2016. Some even auction off the chance to have an empty seat beside you in coach. It is an opportunity for travelers who don’t have superelite status to enjoy the perks without paying full price.

“Any opportunity to upgrade a long-haul flight for significantly less than buying into the business-class cabin is good,” says Michael Trager, a New Jersey native living in Amsterdam who has been the high bidder in several KLM Royal Dutch Airlines upgrade auctions.

His strategy is to bid no more than $322 to $430 (€300 to €400) each way in auctions. If he wins, his business-class round-trip fare would be about $1,600 (€1,500)—less than half the cost of buying a business-class seat outright. He has been in at least six KLM auctions over the past year and has been the winning bidder three times.

Airlines rarely offer free upgrades on long-haul international flights; even elite-level frequent fliers have to pay for business-class upgrades with miles, cash or both. But auctions are migrating into domestic U.S. flights, where airlines have been trying to wean travelers off frequent free upgrades.

Delta Air Lines, for example, says that as a result of offering discounted first-class fares and paid upgrades for fees, 57% of its first-class seats have customers who paid their way in rather than free upgrades, up from 11% a few years ago. And Delta wants to push that to 70% over the next two years, Delta executives told investors in December.

In addition, airline mergers have consolidated the armies of travelers with elite status, so even top-tier fliers are competing with many others for a couple of empty first-class seats each flight.

Virgin America began testing auctions for premium-seat upgrades at the gate an hour before boarding on Las Vegas flights. ‘It does drive last-minute purchase behavior,’ a Virgin America spokeswoman says.

Customers in the lower tiers of elite status see themselves at the bottom of very long upgrade lists flight after flight. SeatBoost, which launched an upgrade auction app that Virgin America began using in September, thinks those frequent fliers may be prime candidates for auctions.

“We give fliers some control rather than being 39th on the list,” says SeatBoost founder and chief executive Kevin Stamler.

American Airlines says it experimented with an auction system and got good feedback from customers, but set it aside during its computer-system integration in the US Airways merger. “It is something we would like to revisit for further assessment,” a spokesman says. United Airlines and Delta say they are both watching the auction phenomenon closely.

Virgin America says it began testing SeatBoost auctions at the gate an hour before boarding on Las Vegas flights. Bidding starts at $10, $30 or $50, depending on the length of the flight and whether passengers are bidding on extra-legroom seats in coach or a first-class seat.

Passengers who bid see where they stand on a leaderboard, and just before boarding begins, the airline awards one upgrade to Main Cabin Select and one to first. The auction, with people bidding against each other in the gate area, can add some excitement—and some potential added frustration—to the boredom of waiting for a flight.

Virgin America says its top-level elite passengers get upgrades to Main Cabin Select seats before the auction, and it still sells upgrades through its airport kiosks and its gate agents. The Las Vegas auctions are a test, and the airline says it is too early to tell if it will expand. The carrier won’t disclose average winning bids, but says the auctions have gotten competitive. “It does drive last-minute purchase behavior,” says Virgin America spokeswoman Abby Lunardini.

Virgin America also uses a system from a company called Plusgrade that launches auctions days before departure. The airline started picking flights for auctions based on bookings last spring, and invites some passengers to bid. Ms. Lunardini says the Plusgrade auctions have been very successful, but Virgin America won’t disclose details on successful bids or revenue generated.

Plusgrade says it has 45 carriers under contract—33 of them live with auctions and 12 in development. Airlines send invitations to an auction based on the customer’s fare, frequent-flier status or particular criteria, such as traveling with an infant, that might make the passenger more eager to spend on an upgrade.

Bidders see a sliding scale depicting the strength of their bid—a way to entice them to raise the ante. Each airline can decide when to end the auction, typically 24 to 72 hours before departure, and whether there will be any winners. Sometimes seats sell right before departure, or are needed to accommodate passengers off canceled flights, and the winning bidder isn’t awarded an upgraded seat.

Germany’s Lufthansa uses Plusgrade to auction off premium-economy seats only—a way to entice coach passengers to try out the new, plusher economy option. El Al, Air Berlin and Tigerair in Singapore are among the airlines to auction off empty adjacent seats. Mr. Harris says about 20 airlines have committed to the practice, known as neighbor-free auctions.

The more participants, the higher prices go, Mr. Harris says. Trans-Atlantic winning bids typically range between $300 and $1,000. “It is always less than buying a business-class seat outright,” he says.

Mr. Trager, who lives in Amsterdam but visits family and graphic-printing clients often in the U.S. and has top-level Diamond status in Delta’s frequent-flier program, says he typically finds discounted coach tickets between $645 and $860 (€600 and €800) on Delta partner KLM. (Tickets sold in Europe for trips to the U.S. are often less than tickets sold in the U.S. for trips to Europe.)

But he’ll buy business class if he can find a discounted fare for no more than €2,000, or $2,150. That’s rare—the round-trip fare between New York and Amsterdam is typically at least $4,084 (€3,800) when bought in Europe, he says. The auction has helped him ride in business-class more often.

“It is worth rolling the dice,” says Mr. Trager, who six months ago started blogging about travel and casino gambling at a site he created called TravelZork.

The KLM auction tells you when your bid is the highest, and sends an email whenever someone tops your bid. “As a good gambler, you need to know what your maximum is,” Mr. Trager says. KLM, like many airlines, also offers more sedate upgrade options, from using miles and cash to upgrading for a fee at check-in. Auctions close 24 hours before departure, and aren’t available on all flights. 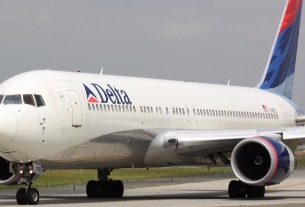 Delta resumes only nonstop flights to China by U.S. Airlines
©2020 广州力矩资讯科技有限公司 粤ICP备06070077号
Tell us more about yourself!