Hainan Airlines (HNA) link between Beijing and Manchester on Friday is just another achievement thanks to Chinese President Xi Jinping's five-day visit to Britain.

The announcement of a new Hainan Airlines (HNA) link between Beijing and Manchester on Friday is just another achievement thanks to Chinese President Xi Jinping's five-day visit to Britain. 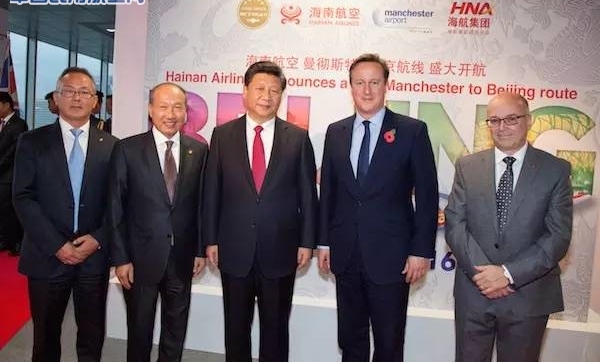 The route, to be opened in June 2016, will be the first non-stop flight between the two cities.

The new direct route will become a bridge of cooperation linking Beijing and Manchester as well as the two nations, said Xi during his visit to the Airport City of Manchester, accompanied by British Prime Minister David Cameron.

Chen Feng, chairman of HNA's Board of Directors, said the airliner is fully engaged in China's "Belt and Road" Initiative by opening more and more China-Europe non-stop flights over the past few years, adding that the Beijing-Manchester route will constitute a new air bridge.

Charlie Cornish, CEO of Manchester Airports Group, said the new route will bring over 250 million pounds of economic benefits to the British economy.

"Manchester Airport is the global gateway for the Northern Powerhouse and the new direct route will provide an opportunity for Chinese investors to access the many opportunities available to them in the North and the UK," said Cornish.

The Northern Powerhouse refers to a proposal to boost economic growth in the North of England, which involves improvement to transport links, investment in science and innovation.

Airport City was created as one of four key vanguard zones in Britain, announced by British Chancellor of the Exchequer George Osborne in his 2011 Budget Speech to Parliament.

Airport City is the first project from the China-UK Memorandum of Understanding on infrastructure cooperation to go into operation, said Xi, calling on the two sides to make it a showcase project of win-win cooperation.

"China wants further discussion with the UK on new measures to cement cooperation in infrastructure construction," the Chinese president said.

The British government has introduced ambitious plans on upgrading infrastructure, building the Northern Powerhouse in the north of England and implementing the strategy of UK Industry 2050.

These British plans and China's initiatives of "Belt and Road," "Made in China 2025" and "Internet Plus" complement each other in many ways, Xi told Reuters prior to the British visit.

During the state visit, both China and Britain voiced strong interest in cooperating on each other's major initiatives and agreed to further discuss a "China-UK infrastructure alliance."

Manchester, the undisputed capital of the north of England, is a core city involved in the Northern Powerhouse program aiming to boost economic growth of the north.

In 2012, China's Beijing Construction Engineering Group took part in a joint venture consortium for developing the Airport City project, which is often deemed as Britain's most significant development since London Olympics in 2012.