Home > > Chinese visitors to Japan plunge 87.9% in Feb. over coronavirus

Chinese visitors to Japan plunge 87.9% in Feb. over coronavirus

Foreign visitors to Japan dropped 58.3% in February, the largest on-year drop for any month in nearly nine years.

The number of foreign visitors to Japan plunged 58.3 percent in February, the largest on-year drop for any month in nearly nine years, dented by travel restrictions to prevent the spread of the new coronavirus, government data showed Thursday.

An estimated 1.09 million foreigners visited Japan last month, down from 2.60 million a year earlier, after China banned all outbound group travel in late January. Chinese travelers accounted for 30 percent of all overseas visitors in 2019, the biggest among all countries and regions.

The drop in February was the fifth straight month of decline and the largest since April 2011 when the figure fell 62.5 percent after a devastating earthquake and tsunami hit northeastern Japan the previous month, causing the Fukushima Daiichi nuclear disaster.

According to the data from the Japan Tourism Agency, tourists from China dropped 87.9 percent from a year earlier to 87,200 visitors in February. 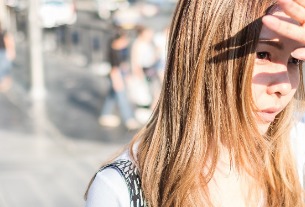