MakeMyTrip will have to pare back an operating loss of nearly $43 million in a matter of three to four quarters.

India’s MakeMyTrip Group expects to narrow losses to the single-digit millions by next year, a rather ambitious goal as it will have to pare back an operating loss of nearly $43 million in a matter of three to four quarters.

In the three months ending June 30, the company continued recording multi-quarter drops in losses, reducing the amount by $2.6 million to $42.9 million, compared with a loss of $45.5 million over the same period last year.

“You can expect to see us bring down the EBIT [earnings before interest and taxes] loss to a single digit in three to four quarters. Then we’re close to break-even and we can focus entirely on growth,” founder and group CEO Deep Karla told Skift in an interview in Singapore on Tuesday.

Ctrip, which now owns nearly half the company and has five of its 10 board seats, may have something to do with it, directly or indirectly. The 49 percent shareholding by the Shanghai-based company has already resulted in MakeMyTrip integrating “some of the best content they [Ctrip] have in flights and hotels,” both in terms of range and rates.

“We have direct access to that, versus us having to take that from a third party like Booking or Expedia,” said Karla. 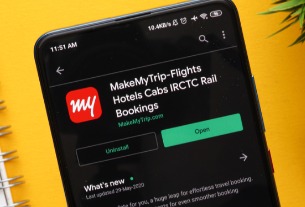