Chinese travel specialist Ctrip launched bookings for journeys on the RENFE network in Spain using the Amadeus platform on October 9. This marks another stage in the company’s expansion into the European rail travel market, where it works not only with Amadeus but with Rail Europe and directly with train operators.

Last year Ctrip launched its Trainpal app covering Trenitalia in Italy, Deutsche Bahn in Germany and the train operating companies in the UK through the Rail Delivery Group. In the UK travelers are offered the option of split ticketing which in many cases gives cheaper journeys on the same train than an A to B booking.

According to Amy Wei, CEO of International Train Ticketing at Ctrip, potentially even cheaper tickets will be offered by choosing a route where a change of train is required – this is aimed at students and others where cost rather than journey time is decisive.

Ctrip also has a partnership with MakeMyTrip in India. Its partner rail operators in Asia include JR East in Japan, where a partnership was agreed in April with a view to capturing traffic expected for next year’s Olympic Games. Ctrip also works with Korail in South Korea, Taiwan High Speed Rail Corp in Taiwan and with MTR Corp as the Airport Express operator in Hong Kong.

The company recently signed a memorandum of understanding with Japanese railway company JR Kyushu to drive Chinese and foreign tourism to the Kyushu region. Kyushu is a popular destination for Chinese tourists and has played a key role in Ctrip’s efforts to boost inbound tourism in Japan. The JR Kyushu Rail Pass, a pass that allows free travel on almost all JR lines in Kyushu, has been available on Ctrip’s platform since last April.

Speaking at the Amadeus Rail Innovation Forum event held on October 9-10 near Nice in France, Wei said Ctrip was working to increase the exposure of rail bookings by showing options for rail travel when a passenger searches trips by air, for example between Roma and Venezia, sometimes offering vouchers providing a discount to encourage them to choose rail. 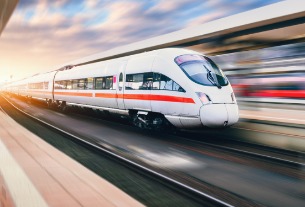