The opening of new high-end chain hotels has accelerated in mainland China’s major markets since 2007.

As the new supply in the Chinese high-end hotel market continues to rise, will the occupancy of those hotels begin to wane? What are the top markets that have attracted high-end hotel investments? What are the hotel brands of these new openings? The STR analyst team answered these questions and more in this article.

* Note: In this article, high-end hotels are defined as hotels that are in upscale, upper upscale, or luxury chains.

In the past twelve years (2007–2018), there were approximately 1,100 high-end chain hotels comprising nearly 330,000 rooms that opened in major Chinese markets. This amount is equal to 317.6% of the existing supply of high-end hotel rooms prior to 2007. Additionally, the annual supply of new high-end hotels remains robust, with over 28,000 rooms (on average) being added in each of the past 12 years. It is worth noting that the average room count of new hotels decreased slightly (from ~300 to ~260) in recent two years, in response to structural changes and reforms in tourism supply and demand (Figure 1).

Although the supply growth soared in the past, occupancy has not been negatively impacted. The data suggests that occupancy of high-end hotels has grown in every single year since 2013 (Figure 2).

The Top Ten markets (Figure 3) for new hotels appear to be a mix of urban and leisure, first- and third-tier cities, inland and coastal. It’s an interesting mix that suggests there is no one single market condition that will attract high-end hotel investments. Rather, investment is drawn from a confluence of factors, ranging from business and leisure travelers’ demand volume, large events, local investment policy, market GDP, etc.

As the capital city of China, it never lost its power to attract high-end hotels since the grand opening of the first international brand hotel in1982. In 2007 and 2008, to prepare for the first-ever summer Olympics held in China, 24 high-end chained hotels, representing 8500 keys, were added to the market.

Shanghai is always under the spotlight in terms of hotel investment. The volume of high-end rooms opening peaked in 2010 in Shanghai, with nearly 6,000 rooms being added. In the same year, Expo 2010 was held in this city from 1 May to 31 October. By the end of the Expo, over 73 million people had visited from 192 countries.

High-end rooms of the top three parent companies (i.e., Hilton Worldwide, Marriott International and Intercontinental Hotels Group) account for 70% of all high-end rooms in the active pipeline for mainland China.

By brand, DoubleTree by Hilton has the most rooms in the active pipeline for mainland China, followed by the full-service Marriott and Hilton brands. The majority of rooms in the pipeline are expected to open within the next three years (Figure 4). 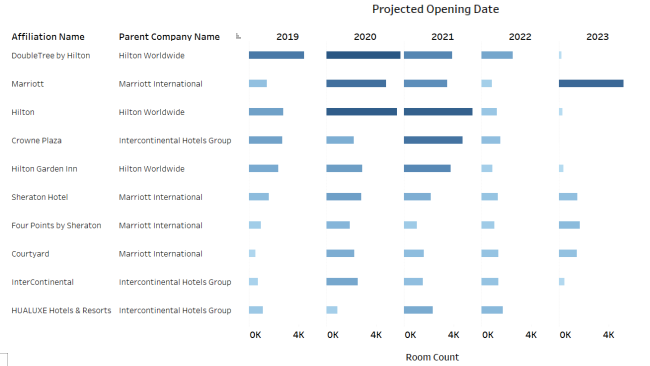 Note. STR defines projects in the active pipeline as ones in planning, final planning, or under construction. Projects without opening dates are excluded from the analysis.

Looking at hotels by chain scale suggests a shifting trend in future openings. Of the 232,266 rooms in the pipeline, about 100,000 are from upscale chains, or 51.7% of the current room supply of upscale hotels (Figure 5). Although that share is relatively small compared to that of upper-upscale chains, it marks a year-over-year rise of 10.5% in rooms at upscale hotel projects in the pipeline. 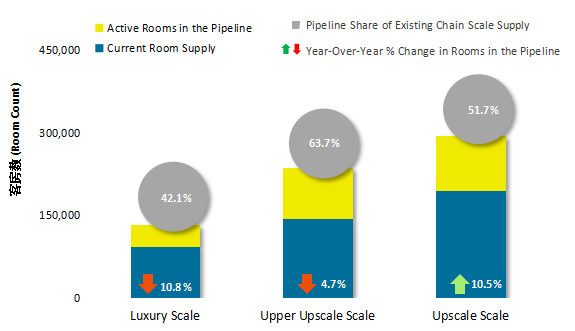 Note. STR defines projects in the active pipeline as ones in planning, final planning, or under construction. Data are as of December 31, 2018.

Moving forward in 2019, Chinese hoteliers should closely monitor hotel pipelines and demand trends in their local markets to be aware of changes in the competitive landscape and to respond quickly to future opportunities and challenges. 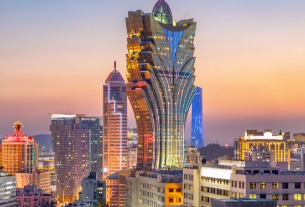 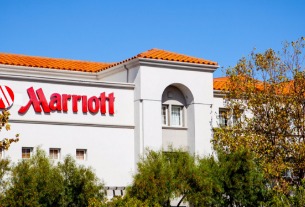 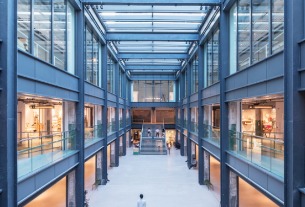