D-EDGE is the European No1 and World No3 hotel distribution technology provider in hospitality. It has support teams in over 100 countries across Europe and Asia.

D-EDGE Hospitality Solutions, the new brand borne out of the merger between Availpro and Fastbooking, will step up its expansion activities in Asia as well as Europe, confident in the knowledge that its new integrated offering combining the complementary strengths of both brands will stand it in good stead to complete.

D-EDGE is the European No1 and World No3 hotel distribution technology provider in hospitality. It has support teams in over 100 countries across Europe and Asia.

CEO of the merged entity, Pierre-Charles Grob, cited three reasons for the decision to merge Availpro and Fastbooking, two acquisitions that were made by AccorHotels in a move to deepen its hospitality technology.

“Availpro has a very strong and reliable tech stack. However, it has no digital marketing experience which Fastbooking is good at such as SEO, SEM, re-targeting and user experience. It made sense to merge the two brands to offer a single experience solution to customers.”

The decision was also made “to build a common future with a new name”, which captures the new common values and direction of D-EDGE. The merged company now has a staff force of 360 and no jobs were cut in the merger, said Grob.

Following the merger its top priority now is to consolidate its position with its 11,000 hotel customers around the world and to focus on key markets where it is stronger such as Asia and Europe.

“Availpro is strong in Europe and Fastbooking is strong in Asia, as well as in Europe – we now have the ability to compete in the independent hotel and mid-size chain market, and to take on competitors like Sabre and TravelClick,” said Grob, who used to run Fastbooking’s operations in Asia, out of Singapore.

“One area that was lacking in Fastbooking’s ability to compete was the absence of a CRS solution and now with Availpro’s tech stack, we can offer comprehensive solutions such as channel manager, booking engine, GDS connectivity and payment systems.”

Grob said one area that was being developed is guest management CRM which is vital to the hospitality business today.

Singling out key trends in the hospitality distribution landscape, he said that was an urgent need for hoteliers to address the net rates situation by moving contracts onto dynamic pricing and commissions.

“A price war will start soon if it hasn’t already. OTAs such as Agoda, Ctrip and trip.com now have access to net rates and if these net rates are displayed on their websites, it will be a complete disaster for hotels and it will compromise the pricing integrity of hotels.”

He predicted that the problem will escalate in the coming months. “Everyone is just waiting for the first move, if it hasn’t already happened, and therefore hotels must make their move to dynamic pricing now. The independent and medium-sized chain hotels have been a bit slower in addressing this issue and it is imperative that they address it now.

Another trend that he expressed concern over was the mistaken belief by hotels that to tap the Chinese market, all they needed was a WeChat account.

“There is a misunderstanding people have about the steps needed to attract Chinese travellers. They think that all they have to do is set up a WeChat account and have payments but they must get ready for the market – there is a lot of education that needs to be done. You have to look at your operations as well. Our recommendation is that hoteliers work with a company like Ctrip first and get their operations right, and then later invest in WeChat.”

Addressing the issue of data privacy and security – Fastbooking sustained a data breach in Japan last year – Grob said that this issue was becoming increasingly important and complex.

‘Basically we have three different cultures around data – in the US, the feeling is data should be monetized; in Europe, the sentiment is business at any price is not good while Asia is looking at what’s happening and are making their own plans. Singapore is probably closer to Europe with its care over data.

“Personal data needs to be protected and there should be certification like with credit card companies and we should all be working together to have some form of certification that will protect consumers.

“Data has become valuable and there will always be unscrupulous people who will try to make money out of it.”

As for whether D-EDGE will expand to offer solutions for the alternative accommodation market, Grob said, “Not for now. We will stay focused on the independent and mid-sized chain market. We do not want to stray too far from where we want to be and where we want to be is to be the number one in hotel distribution technology in four to six years 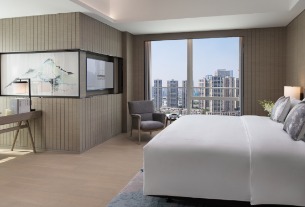 Frasers Hospitality forges ahead with expansion in China
©2021 广州力矩资讯科技有限公司 粤ICP备06070077号
Tell us more about yourself!