Home > > The impact of messaging apps on APAC travel

The impact of messaging apps on APAC travel

One common theme across all three of these messaging apps is the versatility they offer across different services, which aligns with the changing user behavior of particularly millennials who demand instant information and efficiency.

The mobile-only world is fast approaching in the travel industry. In terms of mobile booking rates for hotels, Asia is far ahead of the rest of the world, and China is leading the pack with 60% of its online bookings made on a smartphone. North America and Europe stand at just 28% and 33%, respectively.

One of the reasons for such disparity is due to the surging popularity of messaging apps in Asia. These platforms, originally designed for messaging services, have transformed to encompass other services including shopping, banking, news sharing, and travel activities as well.

As a part of the powerful Tencent ecosystem, WeChat has now reached an 86.7% domestic industry market share since its launch in 2011. As of March 2018, WeChat global active users amounted to over 1 billion, making it one of the most significant messaging apps in the world.

This momentum in market share granted WeChat a perfect pilot to develop its hotel booking platform. On “Mini Programs” (a form of sub-applications within the WeChat app) major OTAs in APAC such as Ctrip, Qunar, Fliggy, and eLong, have successfully diverted their website and app users to generate more direct bookings.

In South Korea, KakaoTalk continues to dominate the local market where 99.2% of total messaging app users use KakaoTalk. Currently, KakaoTalk boasts 49 million users, with more than 41 million of those based in Korea, accounting for 94.4% of the total time spent on mobile messengers in the country.With such high activity among users, it is common for Korean businesses to have an active presence on KakaoTalk.

Another messaging app is LINE with nearly 200 million active users per month across Japan, Taiwan, and Thailand. It is the most popular messaging platform in these areas, and it is also growing its influence in Hong Kong, Singapore, Spain, and Argentina. While LINE remains devoted to its core service of messaging, it has also expanded its services to shopping, food delivery, payment, news sharing, and job searching. With such a variety of offerings, LINE taps into the everyday lives of consumers.The service also heavily focuses on the upper funnel of users by sending them trending travel articles, and trip recommendations via messaging.

One common theme across all three of these messaging apps is the versatility they offer across different services. This ability to do everything in one app aligns with the changing user behavior of particularly millennials who demand instant information and efficiency. As consumers are spending more time on messaging apps and on their phone in general, it will be interesting to see how these travel trends develop and evolve. 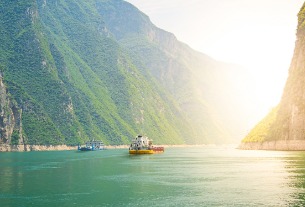 The cruise-ship industry seeks to refloat
©2021 广州力矩资讯科技有限公司 粤ICP备06070077号
Tell us more about yourself!