The preferential policy coaxed 5.6 million visitors to Tibet in the first five months and milked tourism revenue of RMB 7 billion (USD 1.1 billion) for an annual rise of 38% and 41.4%, respectively.

The introduction of a new preferential policy coaxed 5.6 million visitors to Tibet in the first five months of this year and milked tourism revenue of RMB 7 billion (USD 1.1 billion) from them for an annual rise of 38% and 41.4%, respectively.

This year, the number of sightseers to Tibet in the off-season has risen greatly. Last month alone logged 2.92 million travelers for annualized growth of 21%, a spike mainly attributed to the preferential policy for winter tourism the autonomous region’s government issued this year, per statistics by the local tourism agency, as state Xinhua News Agency reported.

Tourists to Tibet can enjoy free tickets for 115 scenic spots of Grade A and above (up to 5A) in the area from February 1 to April 30, per the policy. The hotel rates of tourist hotels of three stars or up in the region may be no higher than 50% of those in the same period last year. Differential discounts for tourist vehicles and airline tickets are also available, and the validity of some of the preferential policies will be extended to the end of this month. 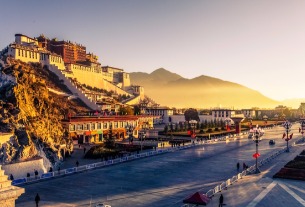