Home > > Airbnb to score more than 100 million stays this year

Airbnb to score more than 100 million stays this year

Airbnb's value at $31 billion is just a small fraction of the hotel market. As of March, Airbnb in the U.S. reached about 6% of the hotel industry’s room supply, 4% of demand and nearly 7% of its revenue.

In less than a decade, Airbnb has transformed how millions of people travel, building a global marketplace around short-term apartment and room rentals. It has also become a real threat to the hotel industry — a rivalry that is likely to intensify as Airbnb’ing continues to expand in popularity.

Its growth rate remains impressive. So far this year it has already accommodated more than 50 million “guest arrivals” — a term the company uses to measure each trip by each guest, regardless of length. This puts the company on track to likely pass 100 million this year, up from about 80 million in 2016.

Airbnb’s popularity is increasing among both leisure and business travelers (which represent about 10 percent of arrivals and 15 percent of travel nights booked). Business trips tripled last year.

One key question is how much of a threat Airbnb is — and will become — to the $550 billion global hotel industry. 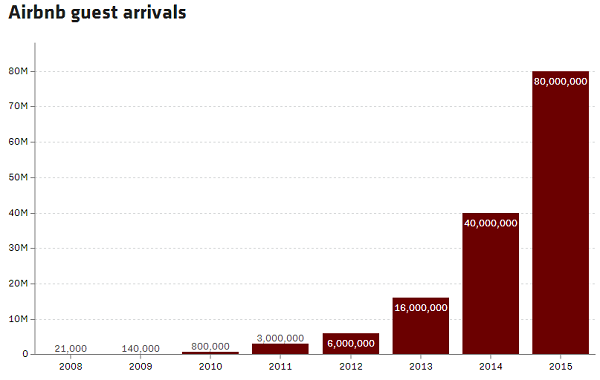 Half of those who used Airbnb last year used it to replace a traditional hotel stay, according to the Morgan Stanley report. But this is where Airbnb’s efforts to attract business travelers — including partnering with large companies to accommodate their employee travel needs and surfacing “Business Travel Ready” listings — matter even more. Approximately 70 percent of room nights for the U.S. lodging industry are business stays.

In terms of awareness — represented here by Google search trends — Airbnb is already approaching the same frequency as mainstream hotel and travel-booking brands, such as Expedia and Marriott.

Still, Airbnb — most recently valued at $31 billion — is just a fraction of the size of the hotel market. As of March, Airbnb in the U.S. reached about 6 percent of the hotel industry’s room supply, 4 percent of demand and nearly 7 percent of its revenue, according to commercial real estate services company CBRE. That’s up several percentage points for each category compared to a year ago. But there still seems to be plenty of room to grow.

But how much? Airbnb faces, among other issues, serious competition from hotels, as well as increased regulation, which could stifle its growth. That’s especially the case in major cities like Paris and San Francisco, where Airbnb hosts now have to register with the government. In New York City, many of Airbnb’s normal listings are considered illegal. For what it’s worth, Airbnb is now seeing its biggest growth outside main cities in places like Fort Lauderdale and Sacramento, according to CBRE.

Booking Holdings CEO: we can replicate European short-term rental success in U.S.
©2021 广州力矩资讯科技有限公司 粤ICP备06070077号
Tell us more about yourself!