Relations between China and South Korea are better than a few months ago, and that should enable the airline to boost its services, Chairman Wang Yu told Bloomberg. Earlier this year, a partial deployment of a U.S. missile shield in South Korea sparked a row with China, resulting in curbs on packaged tours by Chinese citizens. 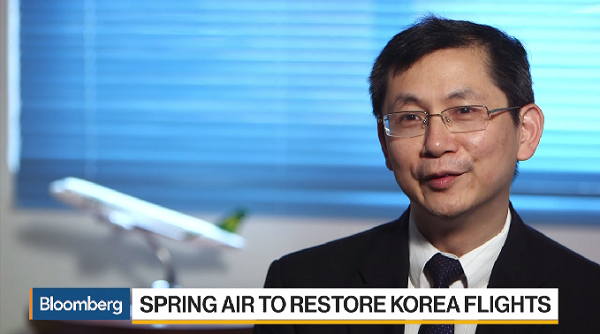 “We are optimistic about short- and mid-haul international flights and will resume and add new flights in line with market demand, capacity and slot availability,” Wang said in Shanghai. “We will add more flights to Japan and South Korea.”

Bangkok is another Asian city Wang has his sights on. Starting this month, Wang plans to deploy a third aircraft to fly between the Thai capital and China, he said. Spring Air also wants to add more flights to Bangkok from Nanchang, the capital of eastern Jiangxi province, Hefei and Guangzhou, cities that have seen surging outbound tourists.

As the carrier works toward expanding its domestic network, it is facing challenges in efforts to bolster the airline’s presence at top-tier cities such as Beijing and Shanghai, where most slots are cornered by China’s top-three state-owned carriers, Wang said.