The Cathay Pacific Group reported an attributable profit of HK$353 million for the first six months of 2016 and its load factor decreased by 1.4% to 84.5%.

The Group's passenger revenue in the first six months of 2016 was HK$33,413 million, a decrease of 7.8% compared to the same period in 2015. Capacity increased by 4.2%, reflecting the introduction of new routes and increased frequencies on other routes. Load factor decreased by 1.4% to 84.5%. Revenue was adversely affected by the suspension (from February) of fuel surcharges, which remained suspended for the rest of the period despite a subsequent rise in fuel prices. Yield fell by 10.1% to HK54.3 cents, reflecting the suspension of fuel surcharges, strong competition and adverse currency movements.

There was a significant reduction in premium corporate travel, particularly on long-haul routes. Revenue from long-haul routes declined compared to the same period in 2015, despite a 4.7% increase in long-haul capacity.

Cathay Pacific introduced a passenger service to Madrid in June. This service has been well received. The airline will introduce passenger services to London Gatwick in September, using new Airbus A350-900XWB aircraft. It stopped operating flights to Doha in February but still offers codeshare services with Qatar Airways on this route. Dragonair did not introduce any new routes in the first half of 2016. Frequencies on Dragonair's Da Nang, Penang, Wenzhou and Wuhan services were increased. Frequencies on Dragonair's Clark and Kota Kinabalu services were reduced. There were no changes to the Group's freighter network in the first half of 2016. Cathay Pacific will introduce a freighter service to Portland in November. The Group continued to manage freighter capacity in line with demand.

Cathay Pacific Chairman John Slosar said: 'We expect the operating environment in the second half of the year to continue to be impacted by the same adverse factors as in the first half. The overall business outlook therefore remains challenging. We expect passenger yield to remain under pressure. Overcapacity and economic fragility will dampen cargo demand. Fuel prices have increased this year, but are still lower than in previous periods. The benefits from lower fuel prices will continue to be partially offset by losses on our fuel hedging contracts. The fuel surcharge remains suspended. In this difficult environment, we will manage capacity and strive to make further improvements in operational efficiency. We will also continue to be vigilant on costs. 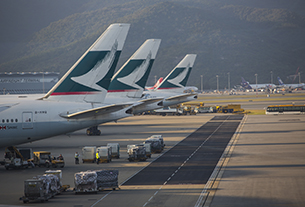