BOC Aviation, the aircraft leasing unit of Bank of China that raised USD 1.1 billion from a share sale last month, closed little changed after gaining as much as 4.4% on its trading debut in Hong Kong.

The stock closed at the IPO price of HKD 42 after climbing to as much as HKD 43.85, according to data compiled by Bloomberg. BOC Aviation sold new and existing shares in Asia’s second-biggest initial share sale this year, and said it plans to use the proceeds to help pay for new planes.

Asian leasing companies are boosting fleets as the region is set to overtake the U.S. as the world’s largest market for aircraft in two decades. Economic growth in China, India and Southeast Asia is spurring air travel and encouraging more companies such as billionaire Li Ka-shing’s CK Hutchison Holdings to enter the plane-leasing market, whose returns can exceed those of airlines and are usually locked in through multiyear contracts. 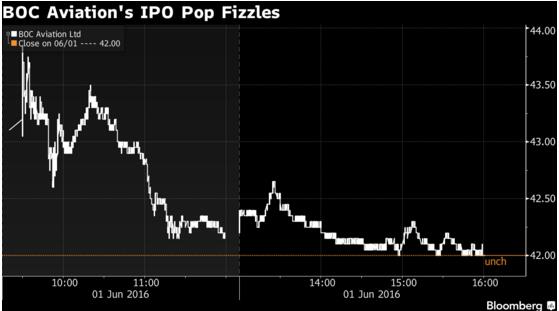 China Aircraft Leasing Group Holdings, which raised HKD 728.9 million (USD 94 million) from an IPO in July 2014, fell on the first day of its trading. The shares of the company are now 44% higher than the offer price and trade at 9.48 times their estimated 2016 earnings. The price to earnings ratio for Air Lease Corp. is 8.85 and 11.31 for Air Castle.

Shares of China Zheshang Bank, which priced Hong Kong’s largest IPO this year, are down 1% since the offer based on Tuesday’s close.

In the past 30 years, the number of aircraft owned by operating lessors jumped 11% annually, according to Singapore-based Phillip Capital Pte. That’s double the pace of growth in the commercial fleet, where 40% of jets are leased.

The leasing business had been dominated by companies such as General Electric Co.-backed GECAS and ILFC. A new breed of Asian companies have emerged to challenge them. Among them are BOC Aviation and Sumitomo Corp.-backed RBS Aviation.

Airlines in Asia will fly more than 16,000 planes within 20 years, almost tripling the current number, according to estimates by Boeing. BOC Aviation, the biggest lessor in the region, owns and manages 270 planes, underscoring the growth prospects in what is set to be the world’s largest aviation market. At the end of last year, the Singapore-based company had 241 planes on order.

BOC Aviation purchases aircraft from manufacturers and then leases them to airlines for a monthly fee. After a certain period, the airline returns the aircraft, which is typically leased to another carrier.

Leasing a plane can be more lucrative than flying one. Operating margins at AerCap Holdings NV, the biggest listed lessor, averaged 34 percent the past three years, according to data compiled by Bloomberg. That compares with 7.8% for the Bloomberg World Airlines Index. 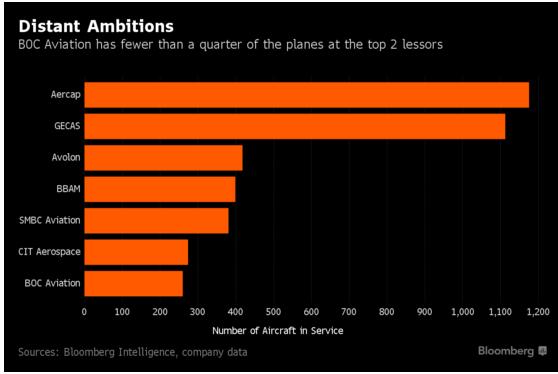 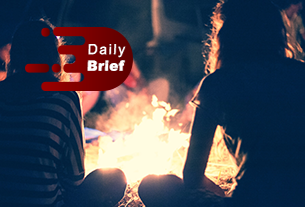 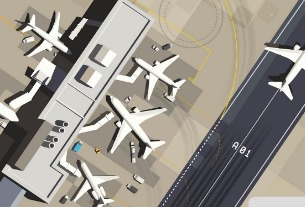